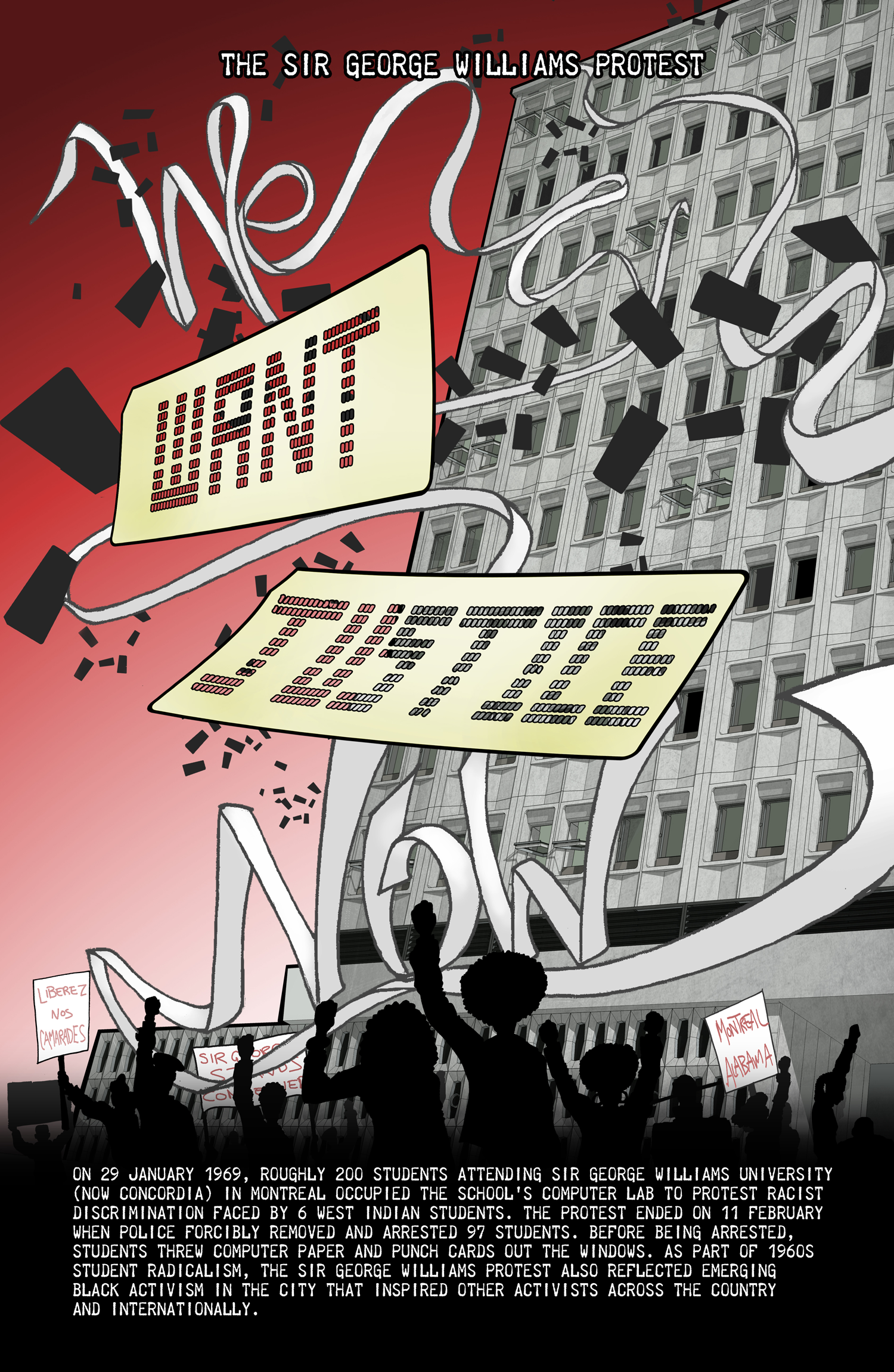 [Image Description: This poster has a red gradient background and a tall grey university building with open windows. Streaming from the windows is computer paper and computer punch cards that spell out the words “We Want Justice Now” in the sky. At the bottom of the building are students in profile with their arms and fists raised on the ground and placards that say “Liberez nos Camarades,” and “Montreal, Alabama.”

Lateef Martin is the founder of transmedia company Miscellaneum Studios, a multi-disciplinary artist, and a graduate from the Illustration & Design program at Dawson College. His practice includes writing, musical composition and performance, singing, dance, narrative, illustration, and fabrication of instruments, costumes, and props. Through Miscellaneum Studios, his life-long mission is to create inclusive media that represents Black people, Indigenous peoples, people of colour, women, the queer community, the differently-abled, and the neurodivergent in a positive light.

Funké Aladejebi is an Assistant Professor of History and Gender and Women’s Studies at the University of New Brunswick. She is currently working on a manuscript titled ‘Girl You Better Apply to Teachers’ College’: The History of Black Women Educators in Ontario, 1940s–1980s, which explores the importance of black Canadian women in sustaining their communities and preserving a distinct black identity within restrictive gender and racial barriers. She has published articles in Ontario History and Education Matters. Her research interests are in oral history, the history of education in Canada, black feminist thought, and transnationalism.

Note: The GHC would like to thank Mathieu Murphy-Perron for his assistance with this poster. Mathieu is the director of Blackout: The Concordia Computer Protests, a play produced to mark the 50th anniversary of this important struggle.

On 29 January 1969, roughly 200 university students barricaded themselves in the Computer Centre on the ninth floor of the Henry F. Hall Building at Sir George Williams University (now Concordia University) in Montreal, Quebec. The standoff was part of a two-week occupation to protest racial discrimination that culminated in riot police forcibly removing and arresting protesters from the building on 11 February 1969. By the time the Sir George Williams protest—often referred to as an “affair” or “riot”—ended, police had arrested 97 people, including both white and Black students, and the university had undergone $1 million dollars’ worth of damage. The protest and its aftermath shattered ideas of racial harmony in Canada, and the event remains the country’s largest student occupation.

Students originally organized the protest in response to allegations of racism and discrimination by biology professor Perry Anderson. In Spring 1968, six Black Caribbean students accused Anderson of awarding them lower grades than their white colleagues for comparable work. At the time, university administrators had limited measures in place for dealing with allegations of racial discrimination. After a quick hearing and short deliberation, administrators rejected the complaints, and Anderson resumed his position. To demonstrate their dissatisfaction with the outcome, students held a peaceful sit-in inside the Hall Building. Things quickly turned violent, though. After someone set fire to the computer lab, the police sought to maintain control and end the student occupation.

After the protest, tensions remained high in Montreal. Residents were divided about the motivations and implications of student militancy in the city. On the one hand, the Royal Canadian Mounted Police and city officials denounced the protest as the work of leftists and foreign student radicals. Though several of the student protesters arrested were white, many people viewed the protest as a result of Black radicalism seeping into Canada from the United States. On the other hand, the protest galvanized Montreal’s diverse Black Canadian population. They responded to the increased criticism and scrutiny of their communities by developing local and transnational organizations that advocated for educational reform and challenged systemic discrimination in various Canadian social institutions. In the wake of the occupation and arrests, Black Canadians established such groups as the Coalition of Black People of Quebec and the National Coalition of Black Canada, and local Black community newspapers like Uhuru, to combat racial discrimination and exclusion within Quebec and across Canada.

While the Sir George Williams protest was part of the growing student activist movements and critiques that occurred in 1960s Canada, it was unique in its demonstration of Black militancy across the country. It indicated a particular kind of Black student protest that disrupted the national narrative of racial equality and peace. Much of the discourse in Canada at the time around racial inequity was rooted in criticisms of the United States. The Sir George Williams protest ruptured the façade of Canadian innocence and became part of a longer radical shift in Black Canadian organizing that occurred in the late 1960s and included such events as the Congress of Black Writers, a four-day conference held at McGill University in October 1968. Emphasizing a growing international focus on Black radical action, the Sir George Williams protest exposed the shared experience of racialization and racism across the African diaspora and included Canada in this global phenomenon. The students who participated in the protest demonstrated a shift in Black radical activism and organizing and the urgent need for political, economic, and social equality for racial minorities in Canada.