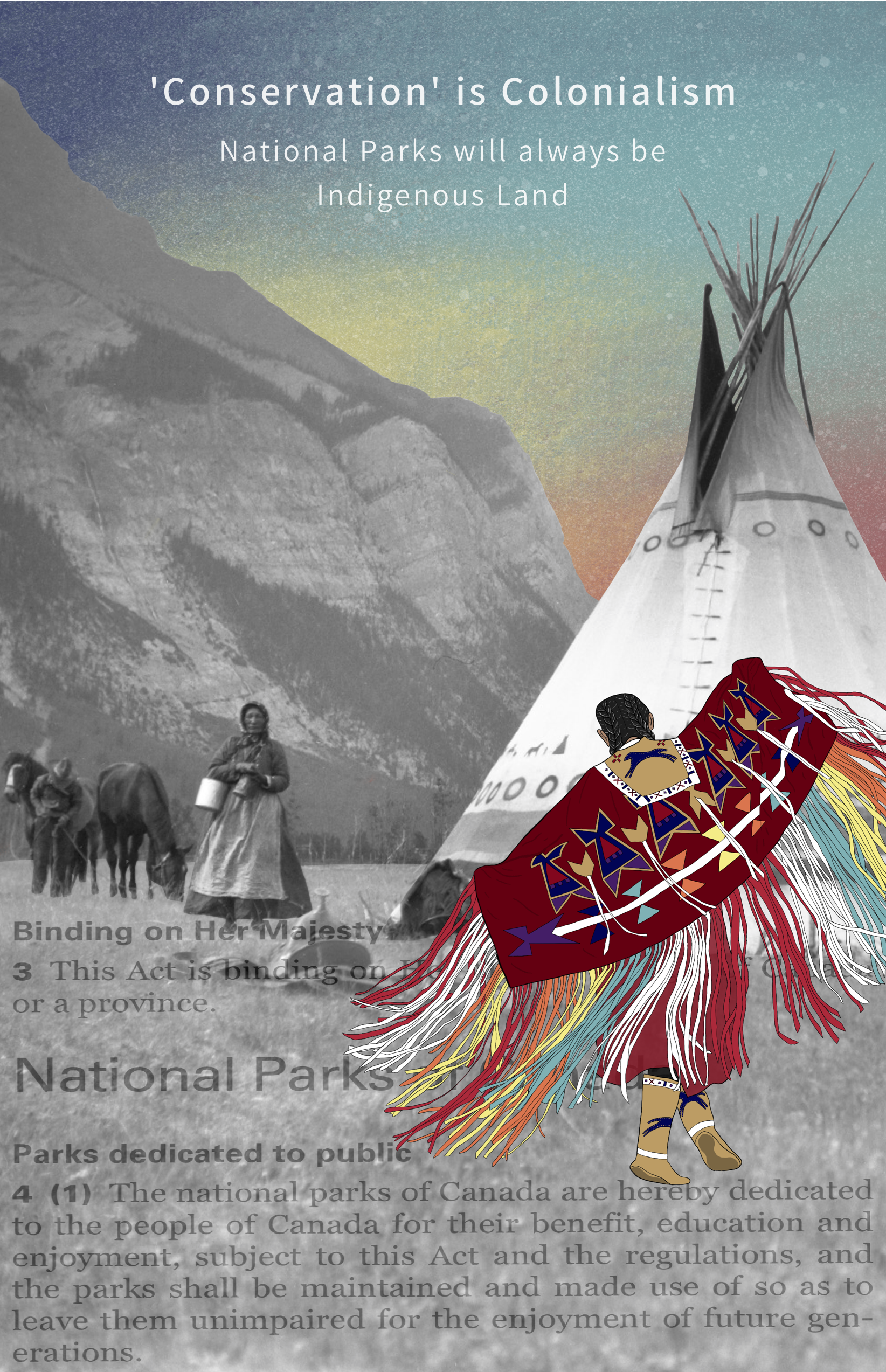 [Image Description: Along the top of the poster it says: ‘Conservation’ is Colonialism: National Parks will always be Indigenous Land.

In the foreground, a fancy dancer is dancing with her arms outstretched. She is wearing a colourful red shawl with a fringe. In the background, a black white photograph of the Two-Young-Man lodge of the Îyâhe Nakoda Nation taken in 1925 during the Banff Indian Days. A woman in a long dress stands beside the lodge and behind her is another person with two horses. In the background of the photograph, a mountain rises up into a colourful sky. Across the bottom of the poster are the words:

National Parks
The national parks of Canada are hereby dedicated to the people of Canada for their benefit, education, and enjoyment, subject to this Act and the regulations, and the parks shall be maintained and made use of so as to leave them unimpaired for the enjoyment of future generations.]

Wacey Little Light (Stommiikiisokkou) is a member of Siksika Nation, which is a part of the Blackfoot Confederacy in Treaty 7. He is pursuing his Bachelor’s degree in Ecotourism and Outdoor Leadership at Mount Royal University in Mohkinstsis (Calgary). Wacey is committed to learning and teaching outdoor Traditional Ancestral Knowledge, and he also has a passion for creating media and art.

Nancy Kimberley Phillips (Ihtsiiyiaakíí) is a Queer Settler Womxn from Treaty 7 (the homelands of the Niitsitapi, Îyâhe Nakoda, Tsuut’ina, and the Métis Nation). She is currently pursuing her Master’s degree in Museum Anthropology at the University of British Columbia on unceded xʷməθkʷəy̓əm, skwxwú7mesh, and sel̓íl̓witulh Lands. She is also an educator, writer, and artist.

Binnema, Theodore, and Melanie Niemi. “‘Let the Line Be Drawn Now’: Wilderness, Conservation, and the Exclusion of Aboriginal People from Banff National Park in Canada.” Environmental History 11, no. 4 (2006): 724–750.

Francis, Daniel. The Imaginary Indian: The Image of the Indian in Canadian Culture. Vancouver, BC: Arsenal Pulp, 1992.

Snow, Chief John. These Mountains are Our Sacred Places: The Story of the Stoney People. Calgary, AB: Fifth House, 2005.

Many Canadians see the country’s system of national parks as a point of pride and a commendable effort to conserve and protect “pristine” wilderness for the enjoyment of future generations. This poster highlights a different perspective: many Indigenous peoples experience the “conservation” of Canada’s national parks as a continuation of the violent process of settler colonialism.

Beginning in the 1880s and intensifying in the early 1900s, the federal government created a national network of parks that conserved “natural” areas and commodified them to contribute to the capitalist economy and nation-building. As part of this process, many Indigenous communities were forcibly displaced within the newly-established park boundaries. Starting in 1885, my ancestors, along with other Niitsitapi and Îyâhe Nakoda peoples, were forcefully removed from our traditional territories in what is now known as Alberta to help create Banff National Park. Initially known as Banff Hot Spring Reserve and then Rocky Mountain Park, Banff was Canada’s first national park. Since then, over 40 National Parks have been created across what is currently Canada, many with similar histories of colonial dispossession.

Canada’s national parks system is predicated on Indigenous erasure and the myth of preserving a barren “wilderness.” As the system was being established, Indigenous peoples were viewed by officials as a threat to wild game and trees, despite the fact that we have had our own systems of ecological management since time immemorial. We have been and will continue to be an integral part of the landscape. Every mountain, every river, every plant, every animal has a name in the languages birthed from these lands. This place has never been terra nullius; it has never been empty land.

“Conservation” only included Indigenous peoples and our cultures when it was deemed profitable and consumable for tourists. When the national park system needed entertainment for tourists arriving by the Canadian Pacific Railway in the 1890s, they turned to us, the very people they displaced. The Banff Indian Days were created in 1894 (and lasted until the 1940s) to entertain a train full of tourists who were stranded in Banff. Indigenous peoples were expected to live in tipis, wear “traditional” clothes, and dance for tourists. Meanwhile, Canadians continued to advocate for us to be pushed off our lands and forcibly assimilated. We were invited to come and dance for people on their holidays, as they “toured” and enjoyed our lands as their parks.

What tourists did not know is that we used these performances to maintain connection and relation with our lands. We may have been displaced, but we have not been disconnected from our territories. To this day, we still use the places that our ancestors did. We still gather medicines; we still touch the waters; we still enact our sovereignty in our lands, your parks. We danced at Banff Indian Days to keep those connections, and we continue to dance on the Canada National Parks Act as depicted in this poster.

The background image that appears on the poster is a photograph of the Two-Young-Man lodge of the Îyâhe Nakoda Nation taken in 1925 during the Banff Indian Days and held in the Glenbow Archives. The foreground image is of Shenoa Show fancy dancing in the Banff townsite on 22 August 2017.* These images, although they are many years removed from one another, speak to and inform one another and highlight Indigenous resilience and resurgence. They are a reminder to everyone who enjoys Canada’s national parks today: Indigenous peoples still use these lands. We have never left. We are still here. National parks will always be Indigenous land.

* We would like to extend our deepest gratitude to Shenoa Snow (Mountain Sage Woman; Holy Sun Woman) of the Îyâhe Nakoda Nation for allowing us to draw her fancy dancing.