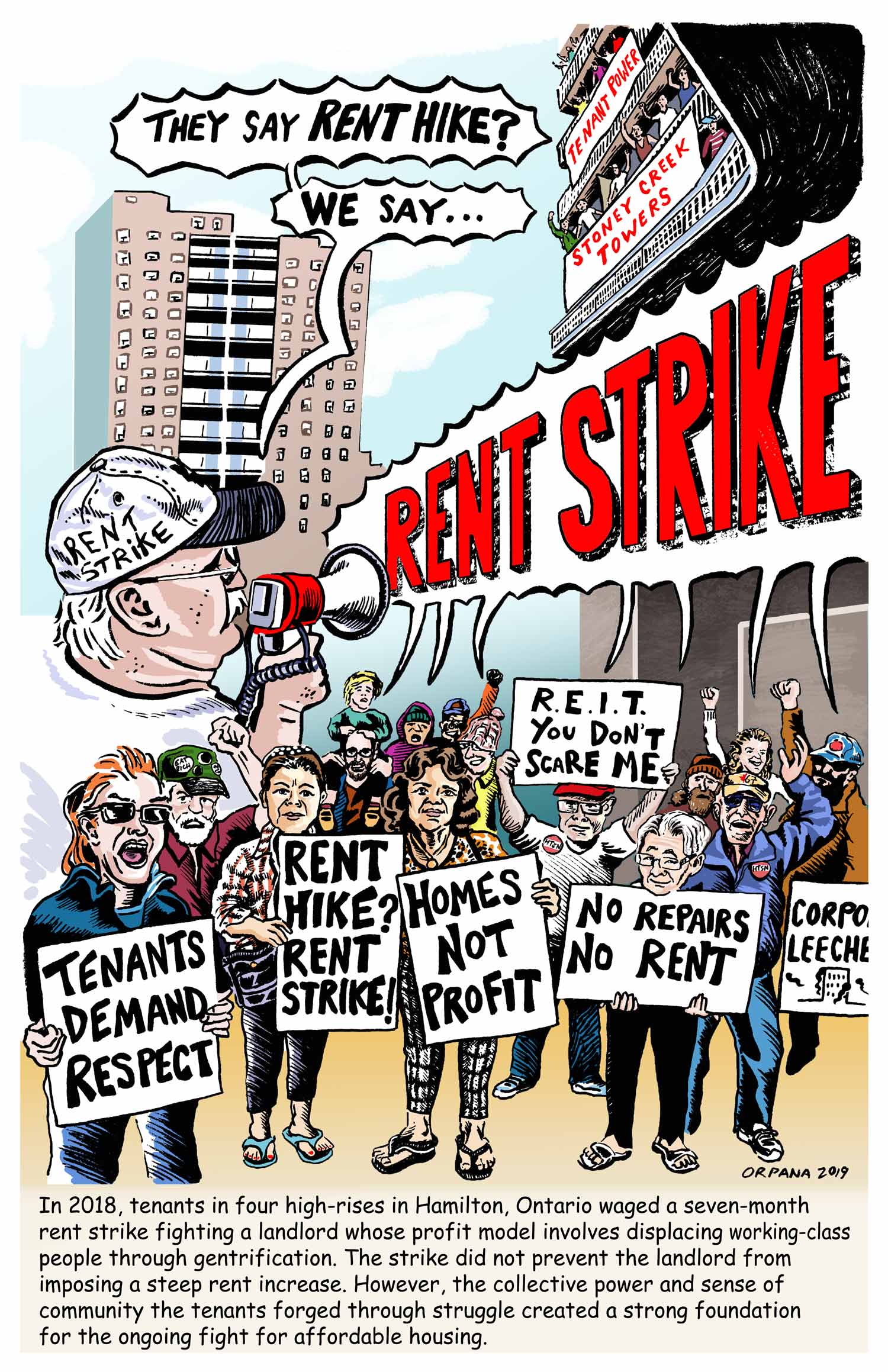 [Image Description: A man with a baseball cap that says, "Rent Strike," and a megaphone is saying, "They say rent hike? We say..."

A crowd of tenants of different ages with banners that say "Tenants Demand Respect," "Homes not Profit," "No Repairs No Rent," are shouting, "RENT STRIKE."

A high rise apartment is in the background on the top left.

Below the image there is text that says:
In 2018, tenants in four high-rises in Hamilton, Ontario waged a seven-month rent strike fighting a landlord whose profit model involves displacing working-class people through gentrification. The strike did not prevent the landlord from imposing a steep rent increase. However, the collective power and sense of community the tenants forged through struggle created a strong foundation for the ongoing fight for affordable housing.]

Rob Kristofferson is a Professor in the Faculty of Liberal Arts and Coordinator of the Graduate Program in Social Justice and Community Engagement at Wilfrid Laurier University.

Simon Orpana is an artist, researcher, and educator whose work investigates the intersections of culture, economics, politics, and energy in the contemporary world. His writing has appeared in numerous journals and book collections, including Zombie Theory: A Reader (University of Minnesota Press, 2017). He produced, with Rob Kristofferson, the graphic history Showdown! Making Modern Unions (Between the Lines, 2016).

Bjarke Skærlund Risager is a Postdoctoral Fellow in the Department of Geography and Planning at University of Toronto and has done research with the Hamilton Tenants Solidarity Network. He is co-editor of Voices of 1968: Documents from the Global North (Pluto Press, 2018) and Contested Property Claims: What Disagreement Tells Us About Ownership (Routledge, 2018) and has published several journal articles on social movements. Follow him on Twitter @bjarkerisager.

Antwi, Phanuel, and Amber Dean. “Unfixing Imaginings of the City: Art, Gentrification, and Cultures of Surveillance.” Affinities: A Journal of Radical Theory 4, no. 2 (Fall 2010): 17–27. https://ojs.library.queensu.ca/index.php/affinities/article/view/6132.

Gray, Neil, ed. Rent and Its Discontents: A Century of Housing Struggle. London and New York: Rowman and Littlefield International, 2018.

Hamilton Tenant Solidarity Network. Hamilton Tenant: A Newsletter by and for Tenants in Hamilton, 2018. https://www.hamiltontenantssolidarity.ca/newsletter.

The Fight for Affordable Housing in Hamilton, Ontario

Simon Orpana’s poster of the 2018 East Hamilton Rent Strike provides a wonderful glimpse of the power forged through collective struggle, its imagery and its voices. It also highlights the towering constructions that are home to the striking tenants, the setting for their everyday lives and communities – a setting that some others see as simply the “untapped value” of a promising investment opportunity.

As is the case in many other cities, working people in Hamilton, Ontario have always struggled to find affordable housing. When the factories that make up Hamilton’s industrial east end were built in the early 20th century, much of the surrounding farmland – created through colonial dispossession – was bought up by real estate speculators eager to make a quick buck by developing it into new working-class housing. This led to soaring rental prices for workers who wanted to live near the factories in which they worked. As a result, many working people were forced to seek rental accommodation in under-serviced and less expensive areas located on the edge of the city and far from work. By 1940, half of all Hamilton working families still rented.

Today, working people in Hamilton are experiencing a similar process of displacement, through gentrification – a process by which working-class people are displaced from their homes and neighbourhoods by more affluent residents. Sensing the “opportunity” of economic change, a new generation of speculators, developers, and landlords have started to purchase much of the city’s housing stock in order to turn a profit. Among them are “Real Estate Investment Trusts” (REITs), which are essentially landlords and property management companies that people and institutional investors can buy shares in on the stock exchange. A REIT’s primary concern is to deliver dividends to shareholders, most of whom will have little if any understanding of the local circumstances—such as the displacement of existing tenants—that generate these profits.

Some working people have responded by staging rent strikes. A rent strike is much more than a passive act of withholding rent until demands are met. As a tactic of class struggle, it can be very effective. In 2018, the seven-month-long East Hamilton Rent Strike brought tenants and their supporters together in a struggle against their new landlord, a REIT. Through a series of rallies, pickets, social events, door-knocking, meetings, and more, the rent strikers supported each other, learned together, and showed to themselves and other Hamiltonians (and working people generally) the strength of standing side by side.

Though the tenants’ demands for a reduced rent increase and repairs were, in the end, only partially met, their emerging collective power might be the most significant outcome of the strike. Two quotes from striking tenants (whose names have been changed to protect their identities) offer great illustrations of this process:

“Before, I didn’t have a voice, I was quiet. I’ve always kept to myself all the time. This strike has brought out my voice.”
– Karen, commenting after giving the first speech of her life at a rally much like the one that inspired this poster.

“I’ve been on just this side of homeless a few times, so I’ve been dealing with this issue for a lot longer than what I actually realized because I didn’t realize it was an actual issue, I just thought it was my problem.”
– Rachel, discussing how going with neighbours and supporters to protest at the landlord’s headquarters in Ottawa “switched it from kind of a private matter to a more public matter.”

These quotes capture the transformative effects collective political action like rent strikes can generate. By pushing back against the fear, isolation, and anxiety produced by the increased efforts to profit from the necessities of life, like housing, tenants realize their collective political power to put predatory landlords and investors on the defensive. Alongside struggles against the deterioration of our larger, shared environment, the right to safe, affordable housing is one of the central political struggles of our times.