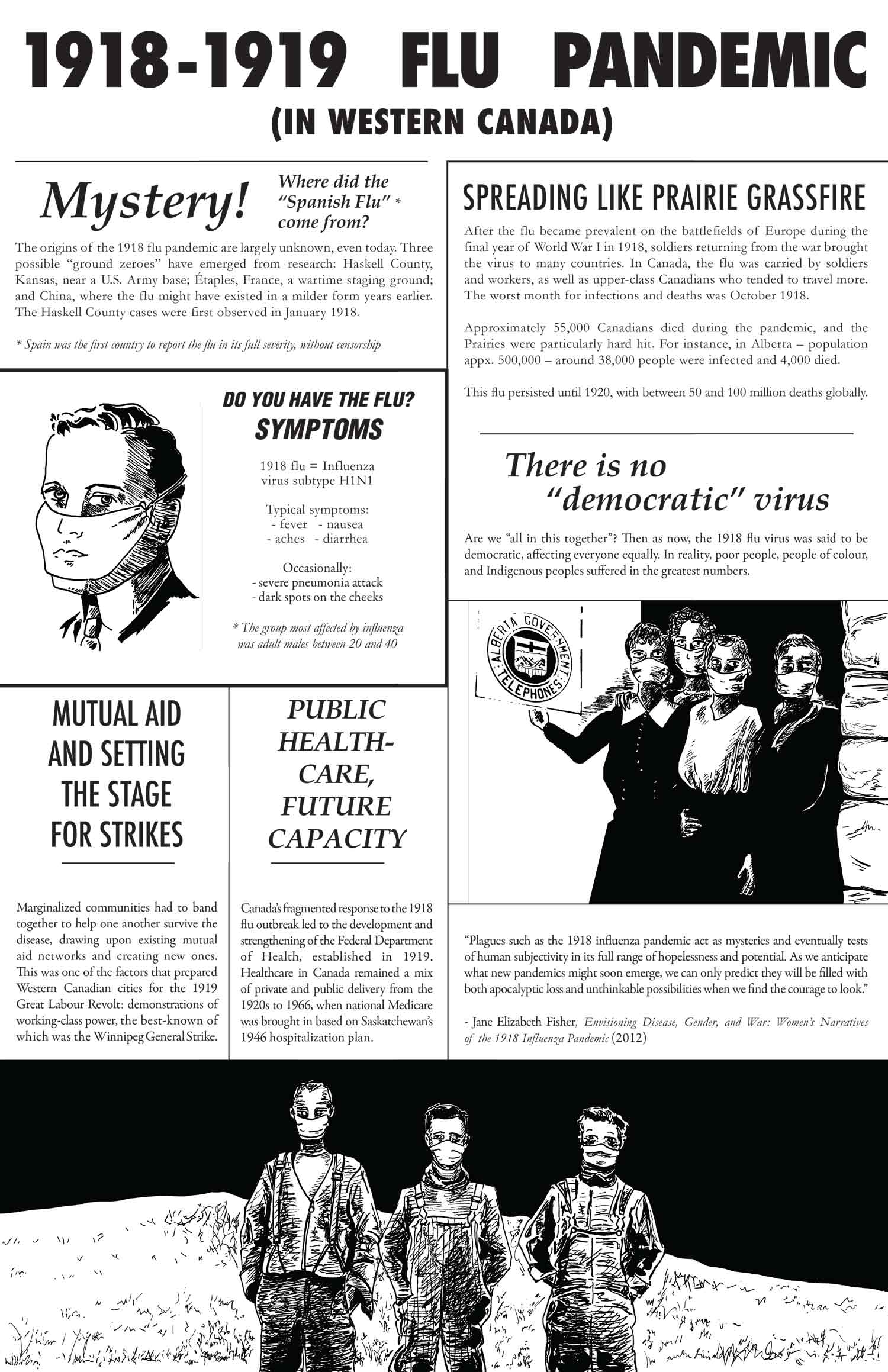 Mystery! Where did the “Spanish Flu”* come from?
The origins of the 1918 flu pandemic are largely unknown, even today. Three possible “ground zeroes” have emerged from research: Haskell County, Kansas, near a U.S. Army base; Étaples, France, a wartime staging ground; and China, where the flu might have existed in a milder form years earlier. The Haskell County cases were first observed in January 1918.
* Spain was the 1st country to report the flu in its full severity, without censorship

SPREADING LIKE PRAIRIE GRASSFIRE
After the flu became prevalent on the battlefields of Europe during the final year of World War I in 1918, soldiers returning from the war brought the virus to many countries. In Canada, the flu was carried by soldiers and workers, as well as upper-class Canadians who tended to travel more. The worst month for infections and deaths was October 1918.
Approximately 55,000 Canadians died during the pandemic, and the Prairies were particularly hard hit. For instance, in Alberta – population appx. 500,000 – around 38,000 people were infected and 4,000 died.
This flu persisted until 1920, with between 50 and 100 million deaths globally.

DO YOU HAVE THE FLU?
SYMPTOMS
1918 flu = Influenza virus subtype H1N1
Typical symptoms:
- fever
- nausea
- aches
- diarrhea
Occasionally:
- severe pneumonia attack
- dark spots on the cheeks
* The group most affected by influenza was adult males between 20 and 40

There is no “democratic” virus
Are we “all in this together”? Then as now, the 1918 flu virus was said to be democratic,affecting everyone equally. In reality, poor people, people of colour, and Indigenous peoples suffered in the greatest numbers.

MUTUAL AID AND SETTING THE STAGE FOR STRIKES
Marginalized communities had to band together to help one another survive the disease, drawing upon existing mutual aid networks and creating new ones.
This was one of the factors that prepared Western Canadian cities for the 1919 Great Labour Revolt: demonstrations of working-class power, the best-known of which was the Winnipeg General Strike.

PUBLIC HEALTH- CARE, FUTURE CAPACITY
Canada’s fragmented response to the 1918 flu outbreak led to the development and strengthening of the Federal Department of Health, established in 1919. Healthcare in Canada remained a mix of private and public delivery from the 1920s to 1966, when national Medicare was brought in based on Saskatchewan’s 1946 hospitalization plan.

“Plagues such as the 1918 influenza pandemic act as mysteries and eventually tests of human subjectivity in its full range of hopelessness and potential. As we anticipate what new pandemics might soon emerge, we can only predict they will be filled with both apocalyptic loss and unthinkable possibilities when we find the courage to look.”

Karen Jeane Mills is an illustrator and designer. A graduate of NSCAD University in Halifax, NS and NSCC in Middleton, NS, she grew up in Canada’s Maritime provinces and now hangs her hat in Calgary, Alberta. She is a community volunteer inspired by working people in the past and present. More of her work can be seen on Instagram: @prairieflaneur.

Esyllt Jones is an historian of infectious disease and health care, and Professor of History at the University of Manitoba. She is the author of Influenza 1918: Disease, Death and Struggle in Winnipeg, and Radical Medicine: The International Origins of Socialized Health Care in Canada.

Although long referred to by historians as the “forgotten pandemic,” countless families and communities have memories of the 1918–1920 flu: stories of their people, how they persisted, and how their lives were changed by a disease outbreak that killed over 50,000 Canadians and at least 50 million globally. For much of the 20th century, history did not much care about these stories of their lives. Rather, pandemic histories were suppressed and elided.

Without societal remembrance of influenza as a health catastrophe, it was possible to forget the main lesson of the pandemic: how inequality shaped who lived, who died, and the future lives of survivors. Poorer urban neighbourhoods, including those with recent immigrant families, had higher mortality rates. Deaths among Indigenous peoples were of an order of magnitude higher than among the non-Indigenous: 6.2 out of every thousand non-Indigenous Canadians died of influenza, while on-reserve Indigenous death rates ranged from 10.3 per 1,000 in Prince Edward Island, to 61 per 1,000 in Alberta.

Many of these deaths were preventable. The health impact of poor housing, for example, was well known before the pandemic, but public investment was lacking. Health advice for hygiene and self-isolation was impossible to follow in an overcrowded, poorly ventilated house with no hot running water. Without medicare, most Canadians (even those with modest secure incomes) had limited access to medical and nursing care. The poor, racialized, and colonized contended with a health system steeped in the attitudes of Victorian poor law and overt racism and segregation. These conditions before, during, and after influenza eroded public trust in the state and institutions and fueled demands for social change, reflected in a national wave of labour struggles in 1919.

People relied upon community and kin to survive influenza, demonstrating a deep resilience. However, the economic and mental health consequences for children and families could be long lasting. The majority of influenza deaths in Canada were of adults between the ages of 20 and 50. When a male breadwinner died, families experienced downward economic mobility, exacerbated by gender inequality in the labour market, in which women had few employment options and faced unequal pay. In some cases, female single parents whose husbands died from flu could qualify for mothers’ allowances, but not all provinces had these programs. Benefits were miserly and were accompanied by ongoing scrutiny and surveillance of poor women’s behaviour, parenting skills, and housekeeping. Thus, influenza undermined opportunity for a generation of children while government policies failed to lift them out of poverty.

Yet, as Rebecca Solnit has argued about the possibility for solidarity arising from disasters, pandemic histories are potentially hopeful ones. They are narratives about human agency and choice as much as they are about microbes. As the failures of government responses to the pandemic were exposed in 1918–1919, a heightened awareness of bodily inequality, together with mutual reliance, formed the basis of demands for something better: for social justice and for a health system that was not built on inequality. In the 1920s, and intensifying through the economic and ecological disasters of the 1930s, voices for socialized medicine became more and more persuasive. The first socialized health programs in Canada, enacted by the Saskatchewan CCF in 1944–1945, arose from the agency of a generation that experienced two world wars, economic collapse, and a global pandemic. Living through these world historical events they yet imagined themselves not at the end of the world, but living in a more equitable future.