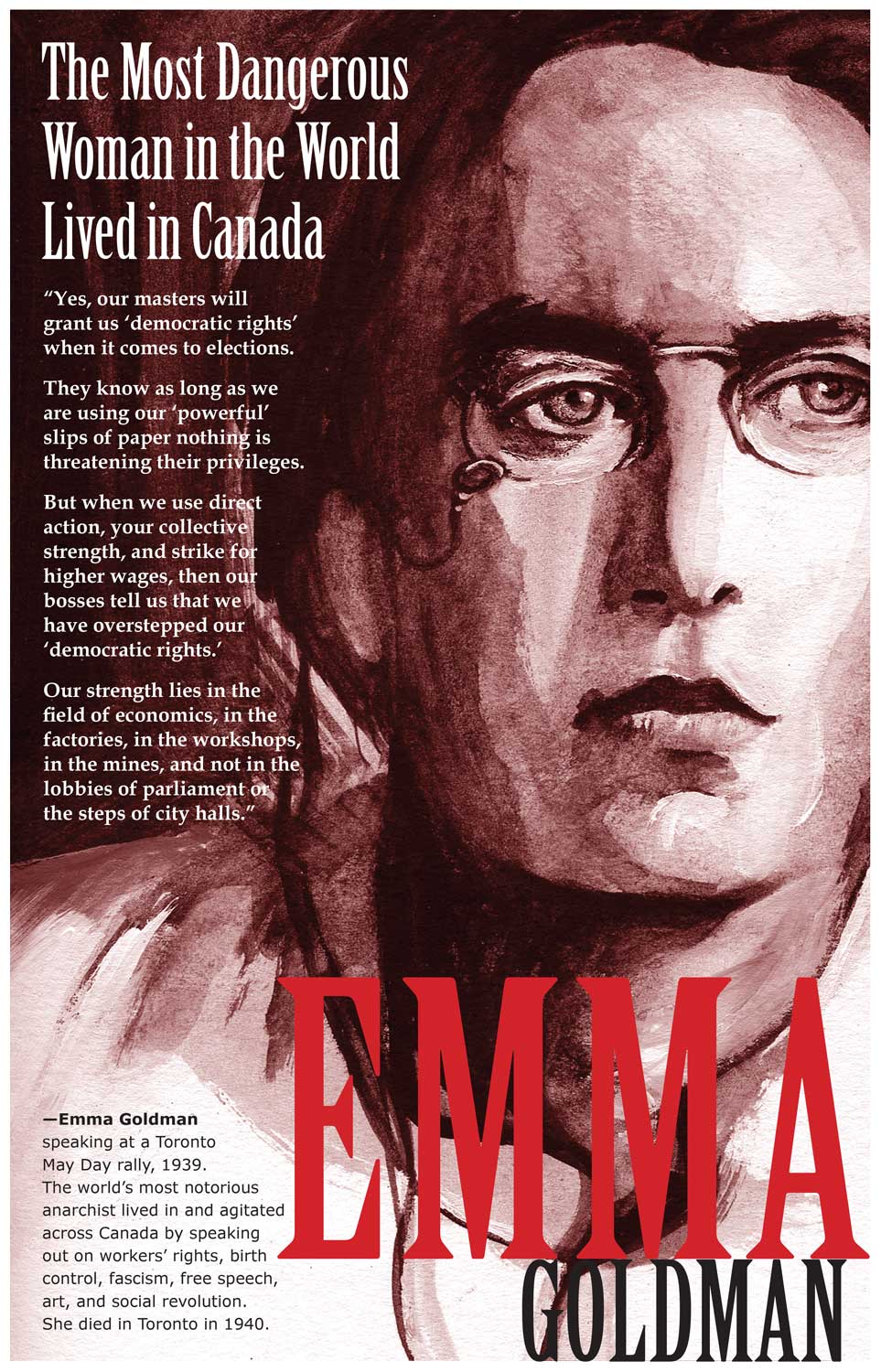 David Lester is the guitarist in the underground rock duo Mecca Normal. His poster of anti-war protester Malachi Ritscher was included in the 2014 Whitney Biennial (NYC). He is author/illustrator of The Gruesome Acts of Capitalism and the graphic novel The Listener. He is at work on a graphic biography of Emma Goldman.

Note: Some of the details in this essay come from Emma Goldman’s folder at Library and Archives Canada in Ottawa, Ontario.

The Most Dangerous Woman in the World Lived in Canada

Poster and Introduction by David Lester

Under overcast skies on a warm spring day at Christie Pitts in Toronto, families relax on blankets as they eat sandwiches out of their picnic baskets. A flat-bed truck is parked in front of a gathering of 1,000 people. A large banner, “MAY DAY 1939,” gently blows in the breeze as anarchist Emma Goldman, who FBI director J. Edgar Hoover once called “the most dangerous woman in America,” addresses the crowd:

Yes, our masters will grant us ‘democratic rights’ when it comes to elections. They know as long as we are using our ‘powerful’ slips of paper nothing is threatening their privileges. But when we use direct action, your collective strength, and strike for higher wages, then our bosses tell us that we have overstepped our ‘democratic rights.’ Our strength lies in the field of economics, in the factories, in the workshops, in the mines, and not in the lobbies of parliament or the steps of city halls.

Emma Goldman was born in 1869 to a Jewish family in Kaunas, Lithuania. Fleeing the pogroms of Europe, she immigrated to the United States in 1885 and committed herself to anarchism. She was deported in 1919 for her anti-war activities, and then after years of exile in Europe, Goldman came to Canada in 1939. Goldman had lived in Canada twice before, and she had toured the country on numerous occasions. She used her extraordinary oratory skills to help develop an active anarchist movement. Her lectures on various subjects inspired large enthusiastic crowds across Canada.
During the final year of her life she struggled with the melancholy of not seeing her “beautiful ideal” realized. Despite thinking Toronto “deadly dull,” she remained undaunted. Goldman encouraged local anarchists to organize, and they formed the Libertarian Group. They held anti-fascist demonstrations, supported refugees of the Spanish Civil War, and held weekly political discussions.

When Canada entered World War Two, five members of the Libertarian Group were arrested and charged with violating the War Measures Act (for possession of printed anti-war materials). Goldman, now 69, leapt into action, taking charge of fundraising and organizing their defense. For Goldman, the case was a question of freedom of speech and civil liberties that affected all Canadians.

The accused were found innocent, but two of the men faced deportation, including Italian-born Arthur Bortolotti. If deported back to Italy, Bortolotti faced certain death at the hands of Benito Mussolini’s fascist state. Goldman solicited support from activists around the world. In Winnipeg, she held public meetings organized by the Arbeiter Ring and the Industrial Workers of the World. She also met with the leader of the Co-operative Commonwealth Federation, J.S. Woodsworth, who promised to take up Bortolotti’s case with the federal government. The RCMP kept tabs on Goldman’s every move: “RCMP AGENT 302: The Workman’s Circle have a number of well-to-do Jews, who provided the funds for EMMA GOLDMAN to visit Winnipeg.” Bortolotti was ordered to be deported, but Emma’s relentless campaigning eventually led Prime Minister Mackenzie King to stop the order.

In the winter of 1940, Goldman had a stroke that paralyzed the right side of her body and left her unable to speak. She died in her apartment on Vaughn Road in Toronto on 14 May 1940. A memorial service was held at the Labour Lyceum on Spadina Avenue, with the crowd so large that it spilled out onto the street.
The long history of social protest in Canada is often left out of official history. Emma Goldman is part of that radical tradition. I read her autobiography when I was a teenager, and I later joined the Vancouver-based anti-authoritarian news journal Open Road (1976–1990), which was the original name of Goldman’s magazine Mother Earth. I created a poster of Goldman for Open Road that was distributed around the world. Forty years later, I’ve created this second poster. Such is the power of history, of remembering, of understanding. Emma Goldman’s courageous actions will continue to challenge us and inspire our own fights for social justice in Canada and around the world.