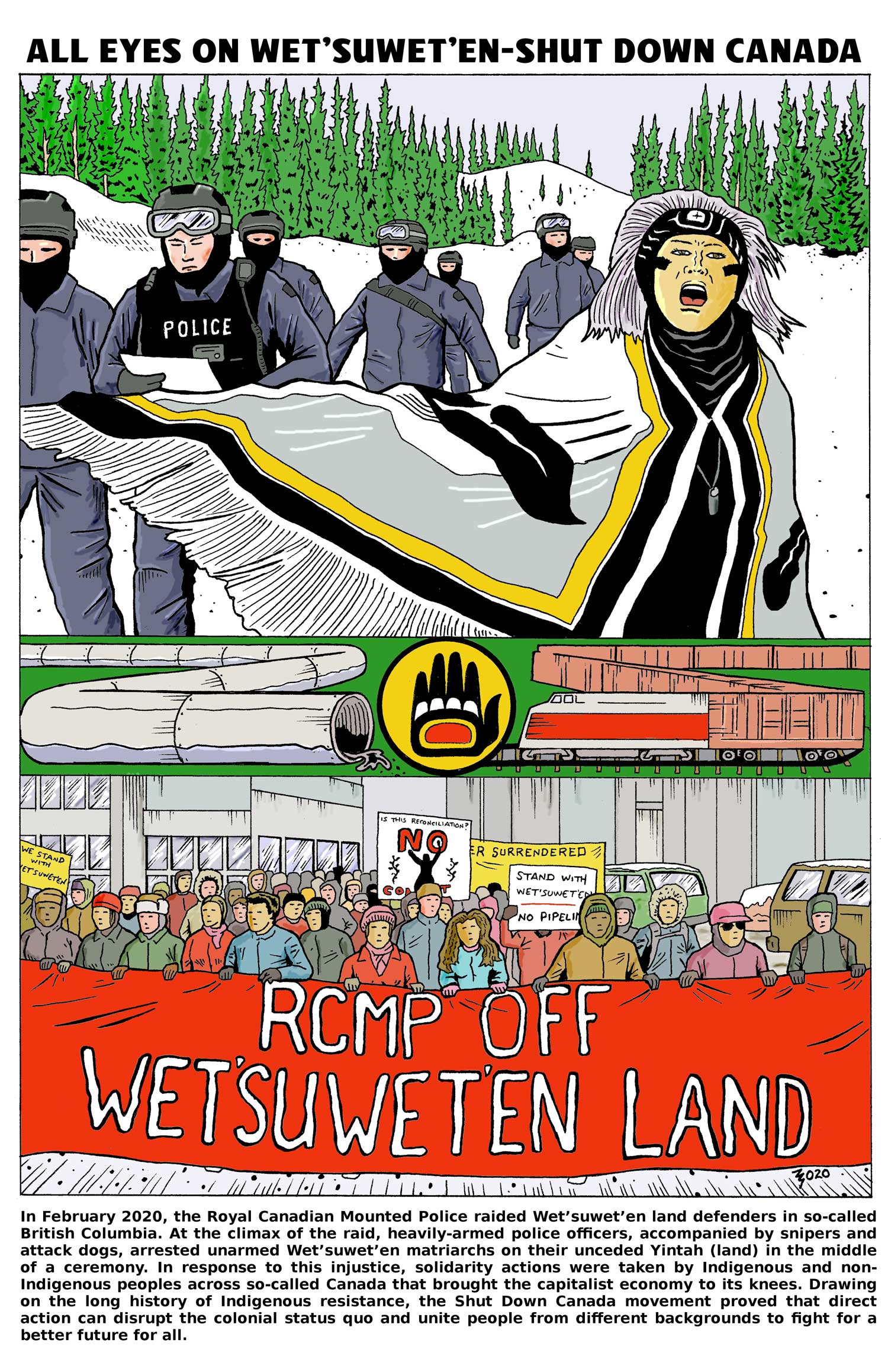 [Image Description: The top of the poster says "All Eyes on Wet’suwet’en-Shut Down Canada." The top image shows a snowy forest with Freda Huson in regalia, singing and dancing, in front of heavy armoured RCMP officers. Below there is an image of a pipeline and a train with a hand in between them. The image below is a city scene of a large demonstration of people with signs and a large red banner that says "RCMP Off Wet’suwet’en Land."

Below the image, the poster says, "In February 2020, the Royal Canadian Mounted Police raided Wet’suwet’en land defenders in so-called British Columbia. At the climax of the raid, heavily-armed police officers, accompanied by snipers and attack dogs, arrested unarmed Wet’suwet’en matriarchs on their unceded Yintah (land) in the middle of a ceremony. In response to this injustice, solidarity actions were taken by Indigenous and non-Indigenous peoples across so-called Canada that brought the capitalist economy to its knees. Drawing on the long history of Indigenous resistance, the Shut Down Canada movement proved that direct action can disrupt the colonial status quo and unite people from different backgrounds to fight for a better future for all."]

Sean Carleton is an historian and a member of the Graphic History Collective.

Unist’ot’en. Invasion. https://unistoten.camp/media/invasion/. (Short film about the Unist’ot’en Camp, Gidimt’en checkpoint, and the struggles of the Wet’suwet’en Nation).

When Justice Fails, Block the Rails!

Poster and Essay by Gord Hill and Sean Carleton

Shut Down Canada emerged in response to raids of Indigenous land defender camps made by the Royal Canadian Mounted Police (RCMP) to facilitate the construction of a natural gas pipeline through unceded Wet’suwet’en territory in so-called British Columbia. Though some people viewed the RCMP’s actions as an unusual display of force, the raids were part of an ongoing pattern of governments using police and military units to dispossess Indigenous peoples from their lands and clear the way for capitalist development.

The RCMP has long served as a colonial paramilitary force in Canada. In 1873, the country’s first prime minister, John A. Macdonald, created the North-West Mounted Police (NWMP) – the RCMP’s predecessor – to extend Canada’s colonial control of Indigenous territories in what would become Western Canada. Inspired by similar colonial police forces in the British Empire, and in the wake of the Cypress Hills Massacre (the mass murder of Assiniboine peoples by American whisky traders on 1 June 1873), Macdonald tasked the NWMP with containing Indigenous resistance on the prairies and guarding against American annexation of the region. When Canada went to war against different Métis, Cree, Assiniboine, and Saulteaux communities for control of the west in 1885, the NWMP formed an important part of the government’s armed forces.

Throughout the 20th century, Canadian military and police forces continued to play a central role in suppressing Indigenous resistance. In 1968, the Ontario Provincial Police (OPP) and the RCMP illegally arrested a number of Mohawk citizens of Akwesasne who blocked a bridge that had been built through their reserve near Cornwall, Ontario without proper consultation and in contravention of the 1794 Jay Treaty. In 1990, during the Oka conflict, Mohawks at Kanehsatà:ke endured a 78-day siege by La Sûreté du Québec, the RCMP, and the Canadian military for opposing the expansion of a nine-hole golf course on unceded Kanien’kéha:ka territory. Later that year, the RCMP forcibly arrested Lil’wat land defenders who were blocking Duffey Lake Road to protest clear-cut logging in their unceded territory. In 1995, the OPP shot and killed Dudley George during the Ipperwash Crisis. That same year, the RCMP carried out a 31-day siege of Secwepemc territory and arrested numerous Ts’peten land defenders during the Gustafsen Lake Standoff in British Columbia.

Police and military violence against Indigenous land defenders continues in the 21st century. In 2013, the RCMP arrested more than 40 members of the Elsipogtog First Nation in New Brunswick for blocking a road to resist shale-gas and fracking activity on their unceded territory. In January 2019, the RCMP invaded Wet’suwet’en territory and arrested people at the Unist’ot’en camp.

For centuries, Indigenous land defenders – such as Unist’ot’en spokesperson Freda Huson, depicted on this poster (with permission) – have resisted police and military violence and government and corporate encroachment on their lands. As this poster illustrates, at times Indigenous resistance has sparked larger protests and demonstrations. Movements like Shut Down Canada show that many people, Indigenous and non-Indigenous, are not willing to sit idly by while governments and police forces ignore legal rulings and violate the rights of Indigenous peoples. Just as Canadian police and military forces have a long history of using coercion to protect the colonial status quo, Indigenous land defenders and their allies continue to prove the power of organized solidarity and direct action to fight for Indigenous rights and to protect the earth for future generations.

* We would like to thank Freda Huson for allowing us to represent her in ceremony. For more information and how to donate to Wet’suwet’en land defenders, see https://unistoten.camp.