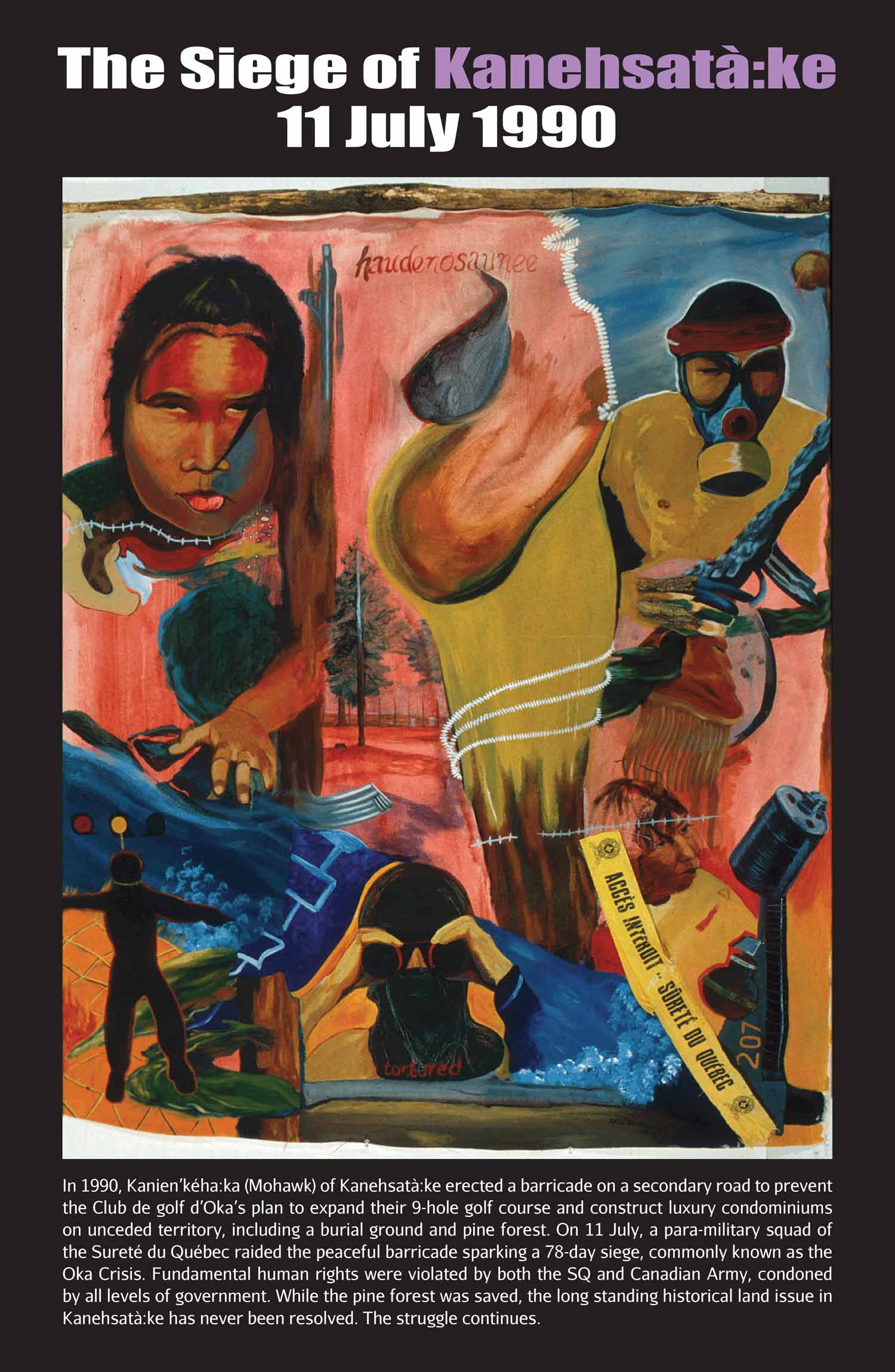 [Image Description:"The title of this poster is the The Seige of Kanehsatà:ke 11 July 1990. Below the title is an original painting by Mohawk spokesperson Ellen Gabriel featuring scenes from a police siege - guns, police tape, Indigenous peoples in gas masks to protect themselves from police tear gas - that took place on 11 July 1990. There is the word Haudenosaunee and an image of the Haudenosaunee flag.

Below the painting are the words:
In 1990, Kanien’kéha:ka (Mohawk) of Kanehsatà:ke erected a barricade on a secondary road to prevent the Club de golf d’Oka’s plan to expand their 9-hole golf course and construct luxury condominiums on unceded territory, including a burial ground and pine forest. On 11 July, a para-military squad of the Sureté du Québec raided the peaceful barricade sparking a 78-day siege, commonly known as the Oka Crisis. Fundamental human rights were violated by both the SQ and Canadian Army, condoned by all levels of government. While the pine forest was saved, the long standing historical land issue in Kanehsatà:ke has never been resolved. The struggle continues."]

Ellen Gabriel (Katsi’tsakwas) is a Mohawk activist and artist from Kanehsatà:ke - Turtle Clan, known for her involvement as the official spokesperson, chosen by the People of the Longhouse, during the 1990 “Oka Crisis.” She is the recipient of the Golden Eagle Award from the Native Women’s Association of Canada (2005) and the Jigonsaseh Women of Peace Award (2008).

Sean Carleton is an historian and a member of the Graphic History Collective.

Carleton, Sean, and Ellen Gabriel. “The Legacy of ‘Oka’ and the Future of Indigenous Resistance.” Canadian Dimension, 9 July 2018. https://canadiandimension.com/articles/view/the-legacy-of-oka-and-the-future-of-indigenous-resistance.

Gabriel-Doxtater, Brenda Katlatont, and Arlette Kawanatatie Van den Hende. At the Woods’ Edge: An Anthology of the History of the People of Kanehsatà:ke. Kanesatake: Kanesatake Education Centre, 1995.

Simpson, Leanne Betasamosake, and Kiera L. Ladner, eds. This is an Honour Song: Twenty Years since the Blockades. Winnipeg: ARP, 2010.

The Legacy of ‘Oka’ and the Future of Indigenous Resistance

In the summer of 1990, Ellen Gabriel (Katsi’tsakwas) was chosen by the People of the Longhouse and her community of Kanehsatà:ke to be their spokesperson during the so-called “Oka Crisis,” a 78-day standoff to protect ancestral Kanien’kéha:ka (Mohawk) land in Québec. This poster, featuring an original painting by Gabriel, depicts the start of the police siege on 11 July 1990 from a Mohawk perspective.

Though many Canadians saw the events of that summer as a “crisis,” to the Mohawks, “Oka” was just the most recent event in an almost 300-year struggle to protect their land from colonial and capitalist development.

Sean Carleton: What do you remember most about the Kanehsatà:ke standoff?

Ellen Gabriel: I was surprised how quickly our small stand sparked a global solidarity movement. There were a lot of protests outside of Kanehsatà:ke, even internationally, and that was heartening. In fact, we were later told by the people of Chiapas, the Zapatistas, that they were inspired by our resistance. I think what sticks out for me most was realizing how important it was for us to be protecting our land, as many generations of Mohawks had done before. In taking our stand, we were simultaneously honouring the ancestors and fighting for future generations. As we went about our daily business, I kept thinking about the ancestors and the fact that, in expanding the golf course, they would be digging up my family to extend a parking lot. I just found that very arrogant and insulting. It strengthened my resolve to resist. It was the right thing to do. I still feel that way.

SC: With the anniversary of Oka coming up, what do you think has been the legacy of that summer. Was the standoff successful?

EG: I think it was successful for other people, but not for us. Our land issue was not resolved in the end — and is still not resolved — but our stand had a number of important ripple effects. The government created the Royal Commission on Aboriginal Peoples (1996), which brought to light a lot of the damage from residential schooling and cleared the path for the work of the Truth and Reconciliation Commission (2015). But our land issue is not resolved. As a result, new development on that land continues … and so does our struggle.

SC: How did Oka shape your activism beyond 1990? What keeps you going and hopeful for radical change?

EG: I was really fortunate to have good teachers and good support around me during that time. When you go through something as traumatic as being shot at, being a target of the army and police on a daily basis, being in the crosshairs, and seeing the kind of violence that was condoned by the state, it’s an awakening. All of the things the older generation talks about are manifesting in front of you, in your day, in your time. As a result of my experiences during the standoff, I became more passionate. I became more determined to defend our land and fight this battle. I love the land. I love being on it. I love the energy that it brings me. I think that is reason enough to keep fighting. I want to see future generations develop a similar connection and live a good life and not have to do what we had to do in 1990. That’s my motivation. For me, this has been going on 300 years too long.