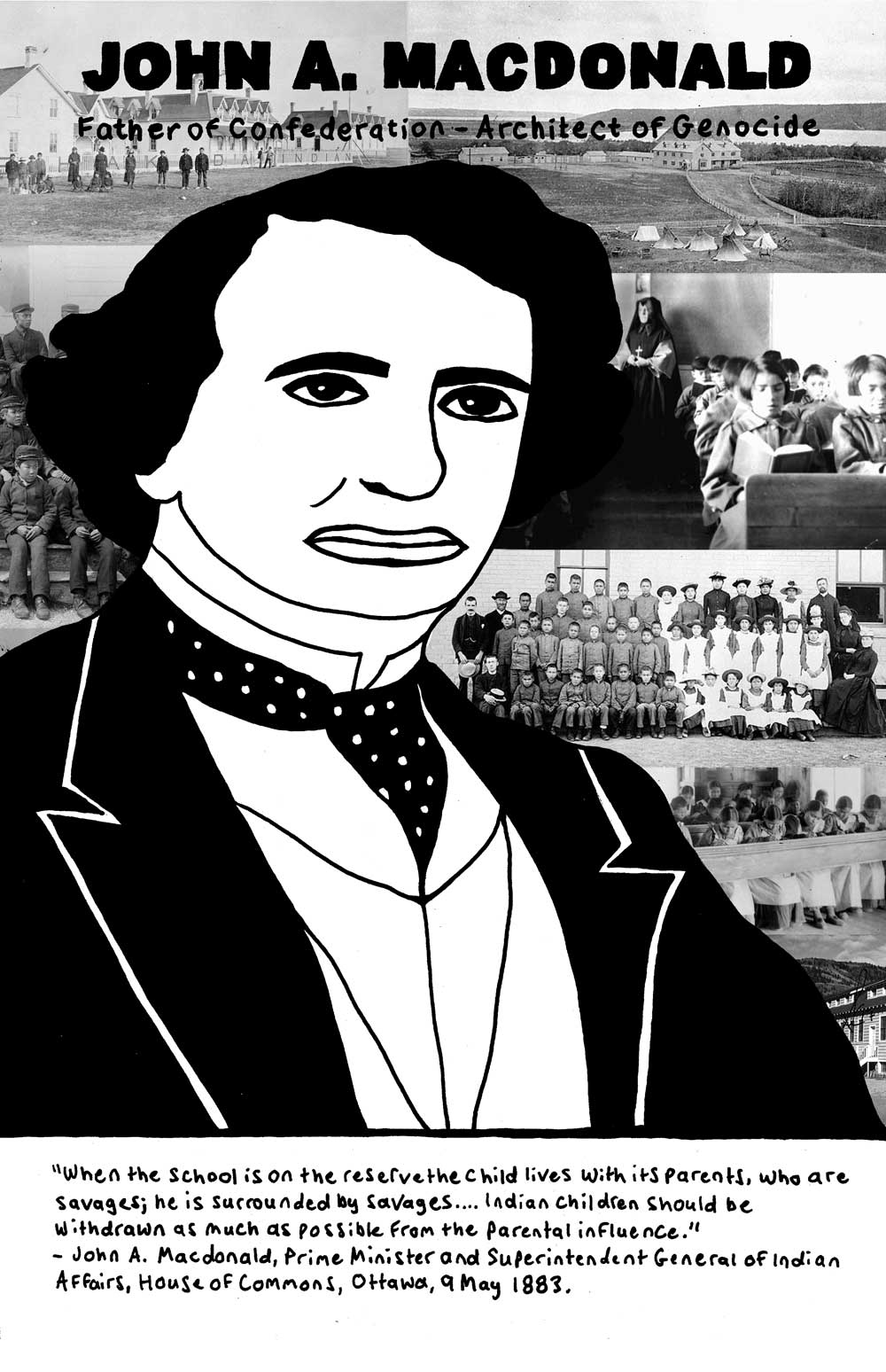 Sean Carleton is an activist, artist, and educator living in Calgary, Alberta on Treaty 7 territory.

Crystal Gail Fraser is a Gwichya Gwich’in woman and Ph.D. Candidate in the Department of History and Classics at the University of Alberta on Treaty 6 territory. Her doctoral research examines how Indigenous peoples confronted concerns around residential schooling in the Northwest Territories during the post-war decades.

Content Warning: This poster contains photographs of residential school students. Although we have endeavoured to be sensitive in selecting these important images, we are aware of their potential harm, especially for those still navigating the ongoing intergenerational traumas of residential schooling. If you have any questions please contact us (graphichistorycollective.ca) or the National Indian Residential School Crisis Line (1-866-925-4419).

Killing the Indian in the Child: John A. Macdonald’s Role in Residential Schooling

John A. Macdonald (1815-1891) is often celebrated for his role as one of Canada’s “Fathers of Confederation.” In his capacity as prime minister (1867-1873, 1878-1891), Macdonald faced immense challenges in building the new Dominion of Canada. Creating a nation was an arduous task that saw Macdonald play a leading role in negotiating the entrance of new provinces into Confederation, constructing a railway network, taming the “wild” west, and overseeing large-scale immigration projects. What is lesser known, however, is that Macdonald, as prime minister, also served as the Superintendent General of Indian Affairs and played a pivotal role in creating Canada’s destructive system of Indian Residential Schools that sought to “kill the Indian in the child.” This poster highlights Macdonald’s dual roles as a nation-builder and an architect of genocide against Indigenous peoples.

In the 1870s, immigrants, who became early Canadian settlers, increasingly dispossessed Indigenous peoples from their ancestral lands as part of the wide and expansive project of “settling” Western Canada. Though the Canadian government had already enacted legislation (such as the 1876 Indian Act) that altered Indigenous systems of governance, called for further controls over reserve land, and dismantled and criminalized Indigenous cultural practices, Macdonald wanted increased intervention into the lives of Indigenous people to accelerate settler colonialism. He appointed a friend, Nicholas Flood Davin, to investigate the success of assimilative programs in the United States, particularly boarding schools for Indigenous children. Impressed by American policies of “aggressive assimilation” through residential schooling, Davin produced the Report on Industrial Schools for Indians and Half-Breeds (1879). Starting in the early 1880s, Macdonald adopted Davin’s recommendation to create residential schools to help eradicate Canada’s so-called “Indian problem.” In 1883, as the first schools opened in current-day Alberta and Saskatchewan, Macdonald defended the new system in the House of Commons:

When the school is on the reserve the child lives with its parents, who are savages; he is surrounded by savages, and though he may learn to read and write his habits, and training and mode of thought are Indian. He is simply a savage who can read and write. It has been strongly pressed on myself, as the head of the Department, that the Indian children should be withdrawn as much as possible from the parental influence, and the only way to do that would be to put them in central training industrial schools where they will acquire the habits and modes of thought of white men.

Foundational to Macdonald’s agenda was the dismantling of Indigenous families through forced separation. Children were taken from their communities, effectively severing inherent ties to their ancestral lands, in hopes that residential schooling would assimilate and better prepare them to contribute to Canada’s emerging capitalist settler society. In short, Canada’s first prime minister instigated, supported, and defended Canada’s genocidal system of Indian Residential Schools.

As Canadians celebrate 150 years of settler colonialism on Indigenous lands in 2017, it is important to remember that residential schooling was not a mistake or aberration. The Indian Residential School system that was in operation from 1883 until 1996 was a carefully planned assault on Indigenous lifeways supported by one of Canada’s most celebrated figures: John A. Macdonald.