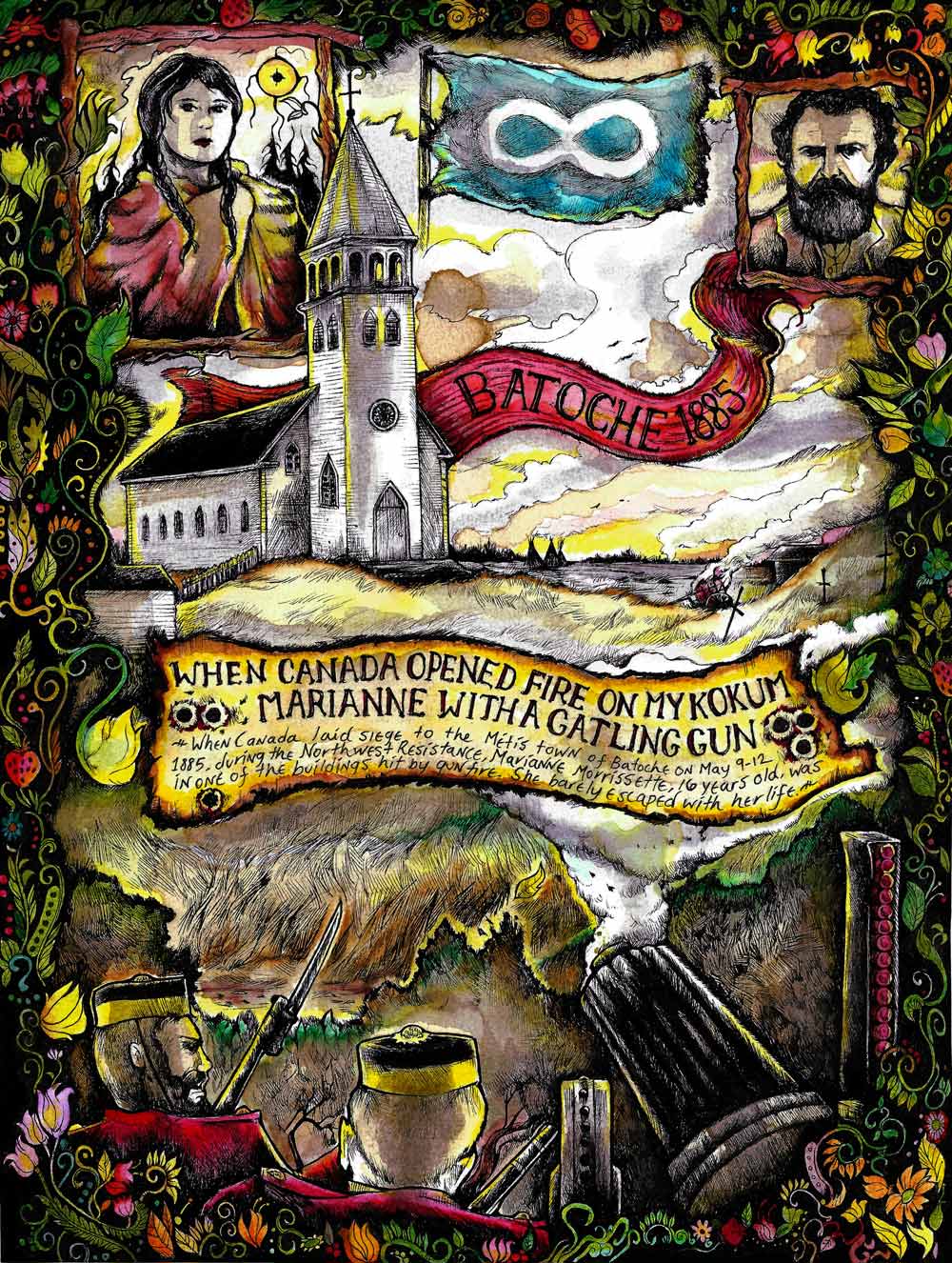 Jesse and Jerry Thistle are road allowance Métis-Cree from Saskatchewan. Their mother is Métis-Cree from Big River, Saskatchewan, and their father is Algonquin-Scottish from Toronto. Jesse, the author, is a P.E. Trudeau and Vanier Scholar, a Governor General Silver Medalist, and a Ph.D. student in History at York University. Jerry, the illustrator, is a life-long multi-media artist specializing in ink and paints, pencil and charcoals, and various other mediums, themes, and forms of artistic expression. Jerry’s heritage as an Indigenous person informs much of his art, and it is his way of connecting with his culture as well as sharing his family’s rich history with others. Jesse’s historical field research in Saskatchewan during the summers of 2013, ’14, and ’15 are the sources of data used to create the narrative of this poster, which, when combined with Jerry’s passion for expressing his Indigeneity through art, are united to tell the story of their great grandmother Marianne Morrissette’s harrowing ordeal at Batoche.

Thistle, Jesse. “The Puzzle of the Morrissette-Arcand Clan: A History of Metis Historic and Intergenerational Trauma.” MA thesis, University of Waterloo, 2016.

Before 1870, the centre of Métis life was the Red River Settlement (RRS), where Winnipeg is today. In 1869, after two centuries of reciprocal trading between First Nations, Métis, and Europeans, the Hudson Bay Company (HBC) sold Rupertsland to Canada without consulting its Indigenous inhabitants. Rupertsland was a vast land mass that drained into Hudson’s Bay and had been arbitrarily granted to the HBC in 1670 by the English King Charles II. The HBC charter expired in 1869, hence the territory was sold to Canada. England was tired of administering to Rupertsland, which, by the 1860s, was no longer profitable.

Resenting the fact that their land was sold without consultation, the Métis took up arms against Canada in 1869, under the leadership of Louis Riel. The Métis Resistance was successful, and after a series of negotiations, the Métis entered Confederation with Canada with the 1870 Manitoba Act, which created the province of Manitoba. Prime Minister Sir John A. Macdonald did not honour the terms of the agreement, however, and the Métis lost Red River to a massive deluge of Canadian settlers during the 1870s. Canada cheated Métis out of Winnipeg by granting land instantly to incoming Anglo-Ontarian migrants while at the same time stalling Métis land claims.

By 1873, Canadian settlers occupied forty thousand acres around Winnipeg—a displacement that pushed many landless Métis into Saskatchewan. At Batoche, Saskatchewan, during the Northwest Resistance of 1885, the Métis would again take up arms to defend their land against the ever-expanding nation-state of Canada. Tragically, the Métis suffered a crushing defeat. Canada brutally suppressed the Indigenous defence by sending an army comprised of thousands of well-armed soldiers, North-West Mounted Police (NWMP), and a Gatling Gun to fight against hundreds of ill-equipped Métis. Batoche, in retrospect, was a heavyhanded display of state power unleashed upon Métis families—children and old men, wives and daughters, husbands, brothers, and cousins—who were attacked and killed trying to protect their homes and livelihoods.

The devastating loss at Batoche is where we find 16-year-old Métis rebel fighter Marianne Morrissette, née Ledoux. According to descendants, Marianne was cooking for Louis Riel, her cousin, the day that Canadian General Middleton opened fire on the town of Batoche with canons and a Gatling Gun. In the heat of the barrage, Riel is believed to have grabbed Marianne and thrown her through a window to save her life; she then escaped into the bush. Traumatized by the devastation of Batoche, and by Canada’s persecution of Métis for decades after the Northwest Resistence, Marianne lived in fear the rest of her life, recalling memories of when Sir John A. and the Canadian soldiers terrorized and hanged her kin.

Download - Batoche 1885: When Canada Opened Fire on My Kokum Marianne With a Gatling Gun (PDF)