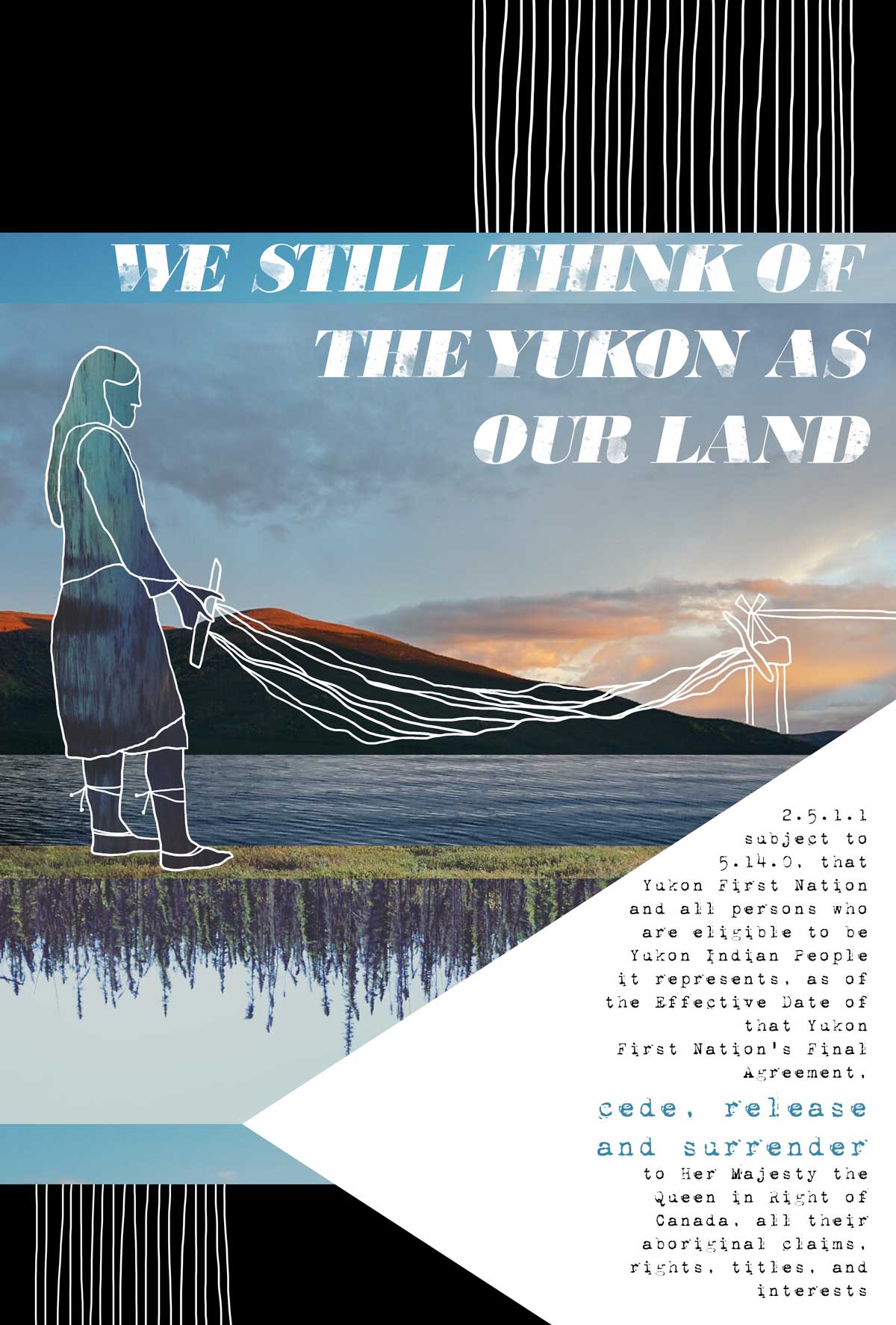 Lianne Marie Leda Charlie is a descendant of the Tagé Cho Hudän (Big River People), Northern Tutchone speaking people of the Yukon. She is the granddaughter of Leda Jimmy of Little Salmon River and Big Salmon Charlie of Big Salmon River on her dad’s side and Donna Olsen of Denmark and Benjamin Larusson of Iceland on her mother’s side. She was born in Whitehorse, Yukon to her mother, Luanna Larusson, and late father, Peter Charlie. Lianne is a Political Science instructor at Yukon Collage in Whitehorse, Yukon, and she is currently pursuing a PhD in Indigenous Politics at the University of Hawai`i at Mānoa. Lianne’s work is also on display on Instagram.

Our Land: 150 Years of Colonialism

“We still think of the Yukon as our land,” wrote the Yukon Indian People in Together Today for Our Children Tomorrow, a document created by the Council of Yukon Indians (now, Council for Yukon First Nations) and submitted to Prime Minister Pierre Elliott Trudeau in 1973. The document outlined a series of grievances that Indigenous peoples in the Yukon had with the territorial and federal governments about their mistreatment of the people, land, water, and animals. To address this mistreatment, the Yukon Indian People called on settler governments to negotiate land claims. Today, 11 of the 14 First Nations in Yukon are self-governing and have signed land claims agreements with the Yukon Government and Canada under the Umbrella Final Agreement (UFA), a modern treaty.

Under the UFA, Yukon First Nations now have various administrative and law-making powers that they can exercise on their settlement lands. Once the purview of the Indian Act or the territorial government, control over citizenship, education, health, and justice now falls under Indigenous jurisdiction. In contemporary Indigenous politics, some consider this granting of rights as an unprecedented victory. The UFA is celebrated by many for extending a series of significant jurisdictional powers to Yukon First Nations; however, negotiating with the settler state and signing land claims and self-government agreements under the UFA came at a steep price. As part of the agreement, Canada included a “cede, release, and surrender” clause (the exact language appears on my poster), which means that in exchange for the state granting Indigenous peoples certain powers and law-making abilities on settlement lands (8% of the territory), First Nations must also “cede, release, and surrender” their rights to the remainder of their traditional territories. This land is now referred to as non-settlement land and it is largely controlled by the state. It is mapped, surveyed, named, renamed, divided up, mined, sold, leased, developed, toured, explored, and claimed by settlers.

The UFA, then, is a double-edged (settler colonial) sword. It guarantees Indigenous peoples local control over important issues, but it also surrenders large parts of our territories to the settler state to be sold to developers and resource extraction companies.

The people, land, water, and animals in our territories thus continue to be threatened by settler colonialism and capitalist expansion. On paper, much of our lands and waters have been ceded to the settler state; however, as my poster illustrates, in our hearts, our bodies, and our everyday actions, we, like the Yukon Indian People in 1973, still think of the Yukon as our land. By continuing to live and work on the land, as represented by the woman wringing out the moose hide on my poster, we assert our existence, as Indigenous peoples, in the face of 150 years of (ongoing) Canadian colonialism.

Download - We Still Think of the Yukon as our Land (PDF)