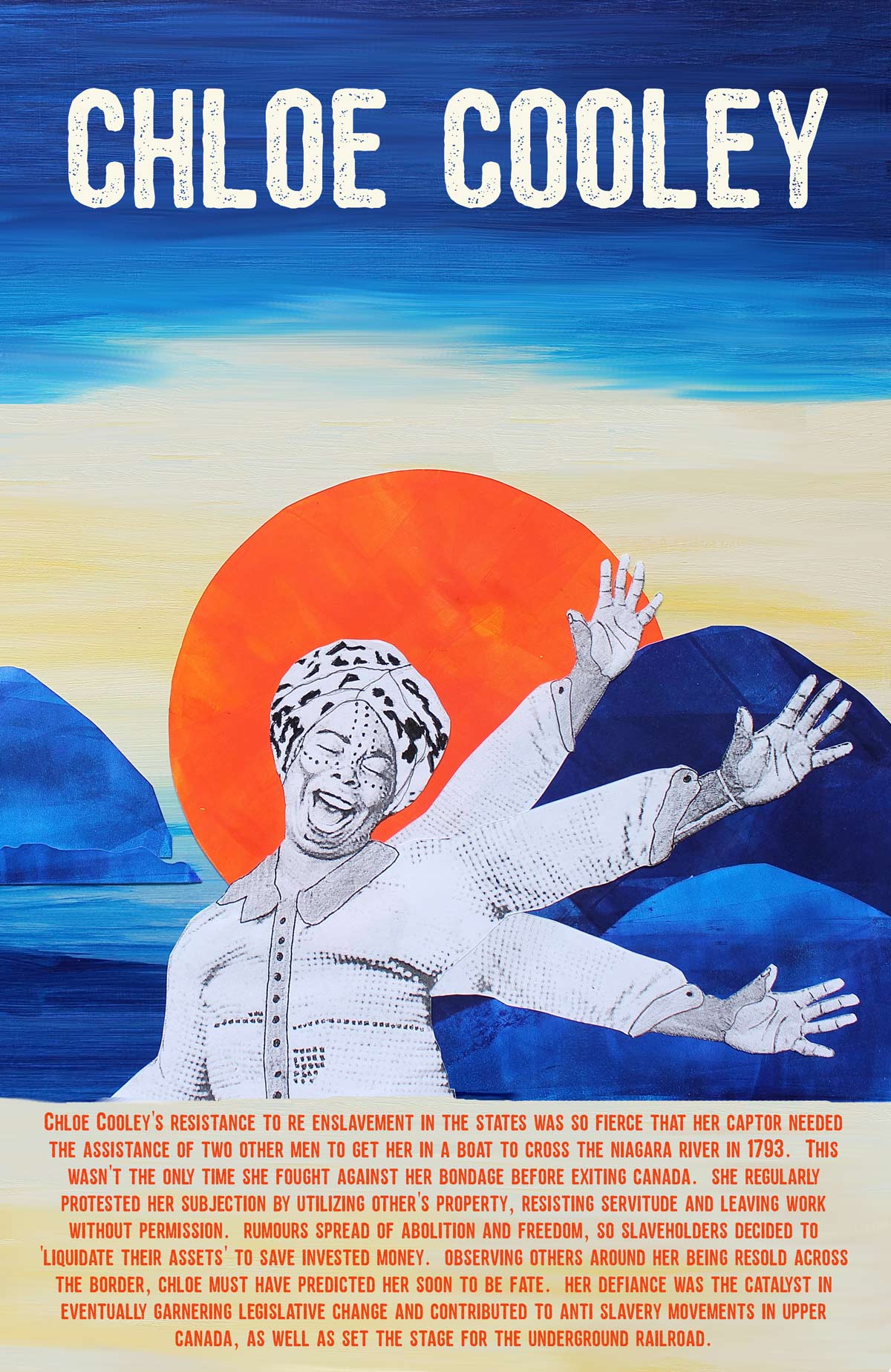 Naomi Michelle Moyer is a self-taught, multidisciplinary artist and writer who often finds herself delving into African diasporic (her)histories, perceptions of Blackness, community, and how they connect to Black experiences. Naomi is known for her zine, Black Women and Self Care: Thoughts on Mental Health, Oppression & Healing; and, more recently, her print series, Black Women in Canada, which pays tribute to some of Canada’s most radical Black feminists from 1793 to 2006. Naomi’s work stems from collaborating with grassroots organizations and publishers and designing posters, t-shirts, and illustrations with themes of resistance and empowerment.

Funké Aladejebi teaches African-Canadian history at York University. Her dissertation, “‘Girl You Better Apply to Teachers’ College:’ The History of Black Women Educators in Ontario, 1940s-1980s,” explores the importance of African Canadian women in sustaining their communities and preserving a distinct black identity within restrictive gender and racial barriers. She has published articles in Ontario History, Southern Journal of Canadian Studies, and Education Matters. Her research interests are in oral history, the history of education in Canada, black feminist thought, and transnationalism.

“She screamed violently and made resistance:” Chloe Cooley and Slavery in Canada

While little is known about Chloe Cooley, she is often remembered as the reason behind Lieutenant-Governor John Graves Simcoe’s push towards the abolition of slavery in Upper Canada. Vehemently resisting her treatment and impending sale, Cooley represented a loud and unabashed articulation of black womanhood that served to disrupt conceptions of freedom and equality in Canada.

Within the historical narrative, Canada is often constructed as “Canaan land,” a place where enslaved African Americans found freedom and escaped the brutality of slavery in the United States. However, Canada had its own history of slavery and racial separation that highlighted the long historical presence of African descended peoples within the nation. Beginning with the earliest recorded enslaved person in Canada in 1628, an estimated 4,000 Panis (Indigenous) and Black slaves were bought, sold, and exploited in colonial Canada. Their experiences exposed the complex and tenuous nature of freedom and enslavement in Canada.

Chloe Cooley’s treatment at the hands of her owner, William Vrooman, reflected the unjust and brutal nature of slavery in Canada. Residing near Queenston, Niagara Falls, Vrooman was a Loyalist from New York who wanted to sell Cooley across the Niagara River to the United States on the eve of 14 March 1793. Resisting her transport, Chloe Cooley caused so much disruption that it took three men to restrain her. Witnesses testified that “she screamed violently and made resistance, but was tied...” (Riddell, 1919). Despite her defiance, Cooley was later delivered to a man down the river bank, never to be seen again.

The seizure and sale of Chloe Cooley created much controversy among Upper Canadians, many of whom were appalled by Vrooman’s conduct. Despite attempts to prevent the abolition of slavery by several white colonial administrators, Lieutenant-Governor John Graves Simcoe would use Cooley’s story to agitate and mobilize Upper Canada’s growing abolitionist community. The result was The 1793 Act to Limit Slavery in Upper Canada which led to the gradual abolition of slavery in Canada. Although the Act itself did not immediately free any slaves, it did restrict the importation of any new slaves into Upper Canada and ensured the freedom of any persons born into slavery at the age of twenty-five. Furthermore, any children born into this cohort would subsequently be free. The Act became an important legislative gain in the fight against slavery in Upper Canada until 1833 when slavery was abolished across the British Empire.

Because Black women’s bodies were intertwined in the labour, domestic work, and childbearing practices of enslavement in Canada, Chloe Cooley’s refusal to yield to her bondage signalled the racial and gendered strategies utilized by Black women within the restrictive and violent confines of enslavement. Contesting the patriarchal nature of slavery in Canada, Chloe Cooley’s life and loud protest stood as a reminder of the resistance and presence of African descended peoples on the Canadian landscape.

Cooper, Afua. The Hanging of Angélique: The Untold Story of Canadian Slavery and the Burning of Old Montréal. Toronto:
HarperCollins Publishers, 2006.