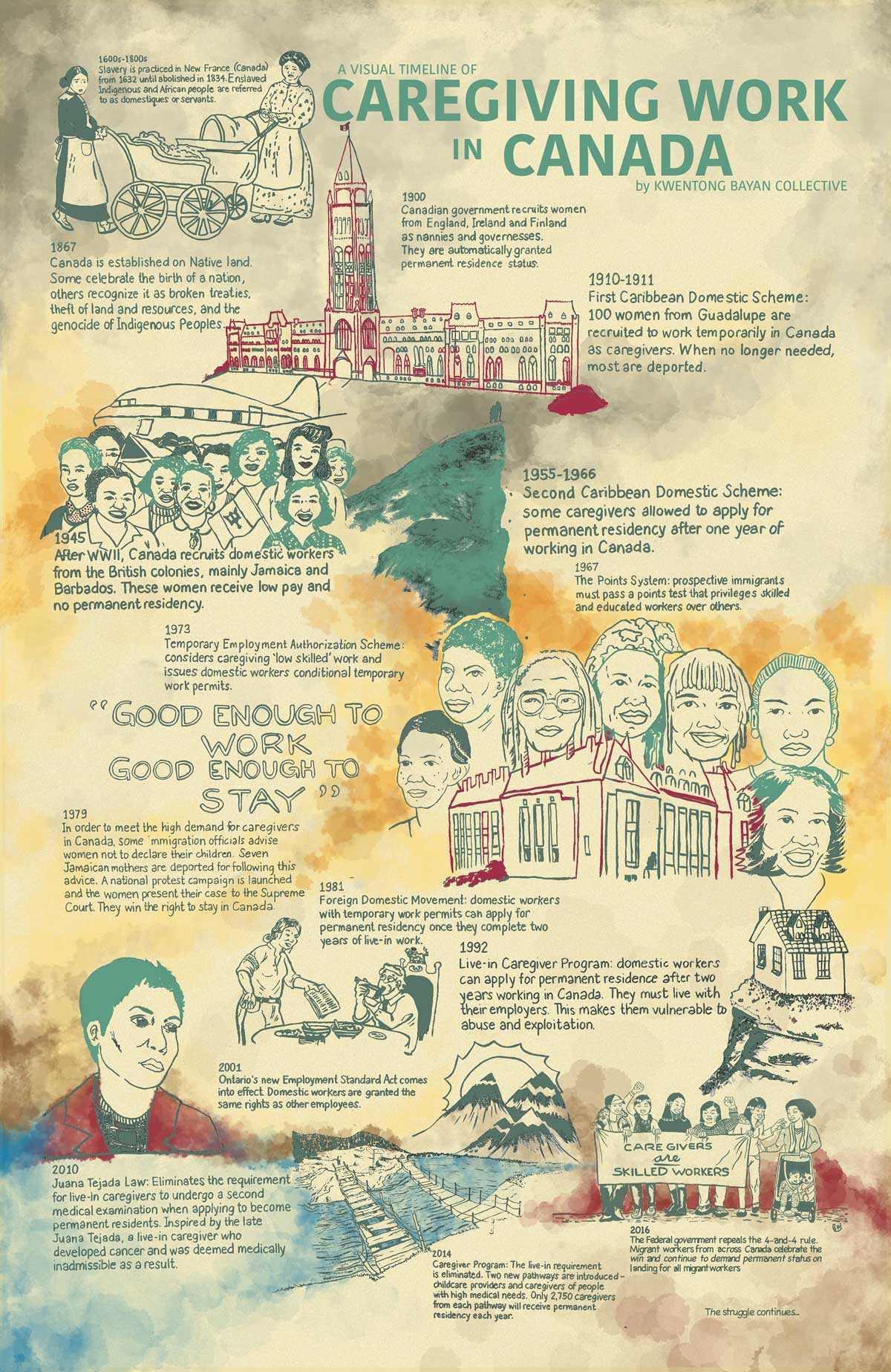 Kwentong Bayan is a collective with a critical and intersectional approach to community-based art, labour, and education. They are developing the comic book, Kwentong Bayan: Labour of Love, in close collaboration with caregivers, advocates, and community allies about the real life stories of Filipina/o and Filipinx* migrant caregivers working in Canada under the Live-in / Caregiver Program. In the Filipino language, “kwentong bayan” is the literal translation of “community stories.” And “Labour of Love” reflects our understanding that both community-based artwork and caregiving work is rooted in love, is valuable, and deserves respect.
Website: lcpcomicbook.com
* We use the terms Filipino/a, Filipin@, and Filipinx to acknowledge fluidity of gender identity in our communities.

Althea Balmes (Illustrator) is a multidisciplinary visual storyteller interested in collaborative creative expressions to tell stories and make art. She uses her strong connection to her culture and her place as a diasporic Canadian woman of colour to inspire her work and as a way to connect to others. She teaches visual storytelling workshops throughout Toronto.

Jo SiMalaya Alcampo (Writer) is an interdisciplinary artist whose art practice includes community storytelling, interactive installations, and electroacoustic soundscapes. Jo works with Caregiver Connections, Education and Support Organization (CCESO)—an organization that supports migrant caregivers—and is a member of the Kapwa Collective—a mutual support group of Filipinx Canadian artists, critical thinkers, and healers bridging narratives between the Indigenous and the Diasporic, and the Filipino and the Canadian.

Ethel Tungohan is an Assistant Professor in Political & Social Science at York University. She is also a community activist and has participated in campaigns seeking justice for temporary foreign workers and caregivers. To read more of her work, visit www.tungohan.com.

Canadian families have always relied on domestic workers. This was true before Confederation, when Canadian families used Indigenous and Black women as slaves. This was also true afterwards, when the Canadian government recruited women from overseas to work as domestic workers. Due to its “white settler” policy, the Canadian government recruited British and Western European women to come as domestic workers because they were “mothers of the nation” and gave these women Canadian citizenship. In contrast, in the early and mid-1900s, women from the Caribbean came to Canada and were either individually sponsored by Canadian families or came under the Caribbean Domestics Scheme (CDS). Under the first and second CDS, which respectively took place between 1910 and 1911 and between 1955 and 1966, the Canadian government saw Caribbean “servants” as the beneficiaries of Canadian “generosity.” Most women under the first CDS were deported after their contracts whereas women under the second CDS could only apply for permanent residency (PR) after working for their employers for one year.

While the points-system eradicated racial preferences in immigrant selection, the establishment of the Non-Immigrant Employment Authorization Program (NIEAP) in 1973 created a hierarchy among migrants. Those who qualified for entry under the points-system were “high-skilled” and were eligible for Canadian citizenship whereas those in “low-skilled” professions such as domestic work could only live and work in Canada on a temporary basis. In response, in 1979 “seven Jamaican mothers” who came to Canada as domestic workers launched a campaign proclaiming that if domestic workers were “good enough to work,” they were “good enough to stay.” As a result, the seven mothers were given the right to stay in Canada. More importantly, their activism garnered the support of other domestic workers and galvanized the Canadian public, leading to the establishment of the Foreign Domestics Movement (FDM) in 1981, which gave domestic workers the right to apply for PR upon completing a two-year live-in work requirement.

In the ensuing years, domestic workers continued their campaigns for better policies. After the founding of the Live-in Caregiver Program in 1992, domestic workers lobbied for improvements. In 2001, their efforts led the Ontario government to include domestic work in the Employment Standards Act. In 2010, the Juana Tejada law was passed. Inspired by Juana Tejada, a caregiver who was denied PR because she had cancer and was deemed “medically inadmissible,” the law eliminated the required medical test for caregivers who want to apply for PR.

In 2015, because of domestic workers’ lobbying, the live-in requirement was eliminated. Nevertheless, the new Caregiver Program (CP) severely constrained the ability of domestic workers to get PR. Under the CP, caregivers are either “babysitters” or “high-medical needs” workers, and they have to complete language and licensing requirements before being eligible for PR. In addition, a quota of 2,750 applicants in each stream was established, which means that caregivers who fall outside this quota cannot apply for PR. As always, domestic workers are active in contesting these policies.

Bakan, Abigail and Daiva Stasiulis, Not One of the Family: Foreign Domestic Workers in Canada. Toronto: University of Toronto Press, 1997.