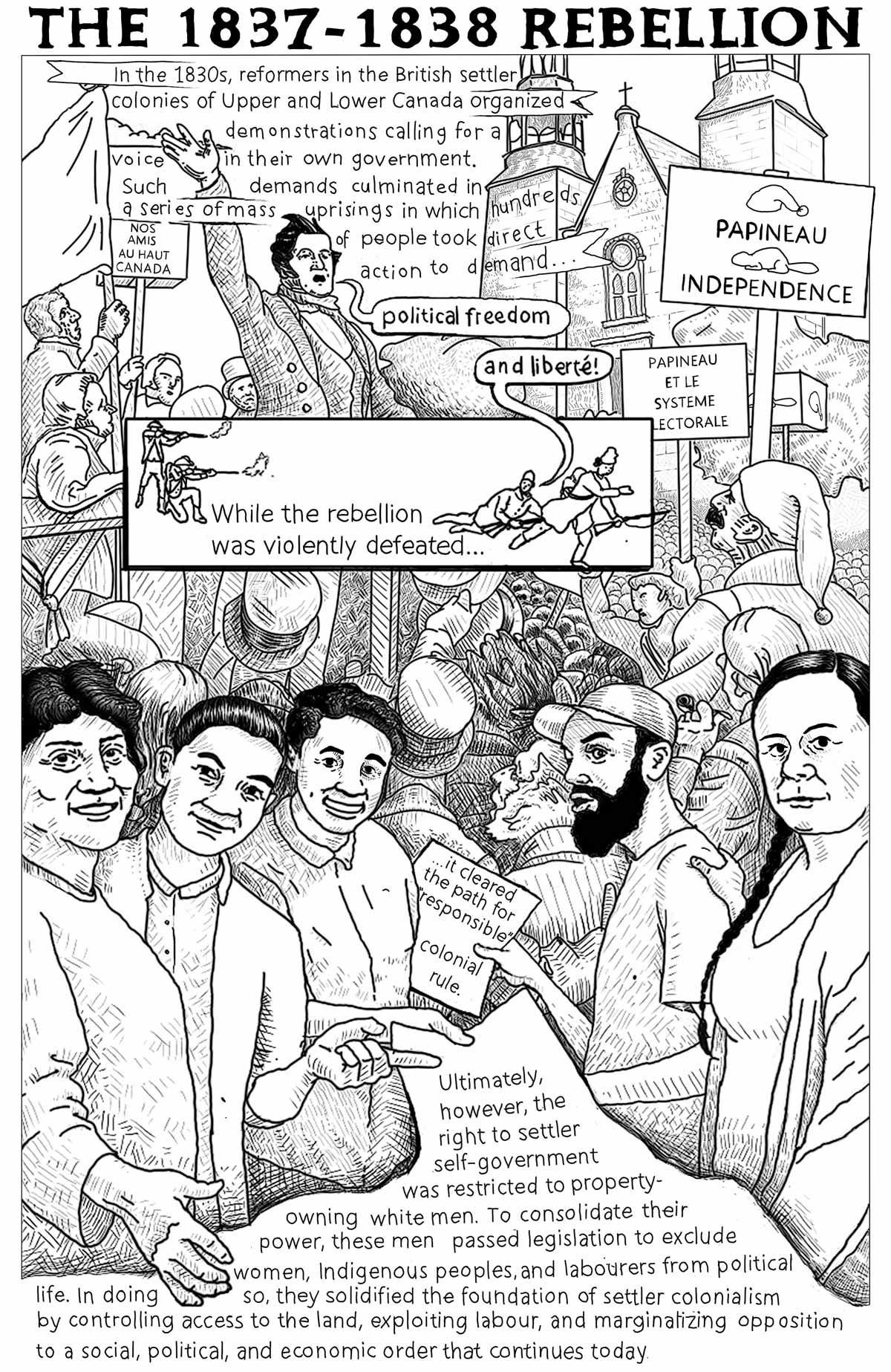 Orion Keresztesi is an artist and activist inspired by the history of working people’s struggles—how they have shaped the world we live in and how they can help us do the same today. He is a proud member and President of Canadian Union of Public Employees Local 1281.

Jarett Henderson is an Associate Professor of History at Mount Royal University in Calgary, Alberta. Jarett is interested in the history of colonial rule in nineteenth-century British North America/Canada, and he is currently working on a project that explores the relationship between sexuality and settler self-government in 1830s Upper Canada.

Curthoys, Ann. “The Dog that Didn’t Bark: The Durham Report, Indigenous Dispossession, and Self-Government for Britain’s Settler Colonies.” In Within and Without the Nation: Canadian History as Transnational History, edited by Karen Dubinsky, Adele Perry, and Henry Yu, 25-48. Toronto: University of Toronto Press, 2015.

Greer, Allan. The Patriots and the People: The Rebellion of 1837 in Rural Lower Canada. Toronto: University of Toronto Press, 1993.

In the 1830s the struggle to abolish irresponsible colonial rule in Upper and Lower Canada, and replace it with a form of government controlled by local settlers rather than by imperial rulers or their appointed representatives, involved significant debate, public protest, threats of violence, and outright rebellion. While the 1837-1838 Rebellion is often celebrated as a defining moment in Canadian history when oppressed settlers fought for a voice in their own governance, it is important to remember that what resulted from this struggle was the imposition of the political framework necessary for settler colonialism to take hold in northern North America.

Wolfred Nelson, one of the leading advocates of political reform hinted at this in 1836, when he charged, “we cannot continue to be subjects if we will not be treated as such, but rather as slaves.” Nelson, along with Louis-Joseph Papineau in Lower Canada and William Lyon Mackenzie in Upper Canada, mobilized masses of settlers—men and women, francophone and anglophone, young and old, rural and urban, rich and poor—with their demands for political freedom and liberté. By the summer and fall of 1837 public meetings of thousands, many of whom were encouraged to attend by a rhetoric that drew on the language of American and French revolutionaries and British reformers, were being held across the countryside. These meetings culminated on 23 October 1837 with a 4,000-person rally at Saint-Charles, Lower Canada, where Nelson and Luc Côté delivered passionate speeches calling for open revolt. The first shots—in what is generally known as the 1837-38 Rebellion—were fired a month later.

On 23 November 1837, the first contingent of 800 patriotes—as the rebels in Lower Canada were known—attacked imperial troops stationed at Saint-Denis-sur-Richelieu, northeast of Montréal. By December 1837, armed conflict erupted in London and Toronto in Upper Canada, and Saint-Charles and Saint-Eustache in Lower Canada, leaving several hundred dead and wounded. Villages such as Saint-Benoît were torched and looted. In February 1838, patriote leader Robert Nelson proclaimed Lower Canada’s independence from a brutish British government that had “pillaged our treasury” and distributed “through the country a mercenary army...whose track is red with the blood of our people.” Nelson also declared the abolition of seigneurial tenure and the death penalty, the granting of civil rights to Indigenous peoples, and the use of French and English in all public affairs. But he also advocated for the prohibition of the douaire coutumier and the restriction of the right to vote to “every male person, of the age of twenty-one years and upwards.” Nelson’s republic, though, would prove to be a pipe dream as those who rebelled were quickly arrested and imprisoned. In Lower Canada, habeas corpus was suspended and those believed responsible were transported to British convict colonies in the Atlantic and Pacific. Samuel Lount and Peter Matthews were publicly executed.

The impetus for rebellion was achieved with the eventual granting of settler self-government, more popularly known as responsible government, in the 1840s. But in practice this British right would be limited to select, property-owning, white men. In fact, as Australian historian Ann Curthoys reminds us, this form of responsible rule recommended by the radical Earl of Durham in his 1839 Report on the Affairs of British North America ought to be seen as a “manifesto for effective settler colonialism.” Durham’s Report recommended the consolidation of white settler power through the reunion of the Canadas (“assimilation” as Durham termed it) as well as an ambitious project to displace Indigenous peoples from their territories (“wastelands” as Durham called them) and replace them with British settlers.

By the 1850s it was clear that the Rebellion ushered in a form of colonial rule that allowed for a greater measure of local control that included primarily white wealthy settler men on the one hand, while on the other hand actively and systematically excluded most Indigenous peoples, marginalized the working classes, and confirmed the exclusion of women as voters. As such, the Rebellion reminds us of the necessity and constant struggle that was (and is) required for political freedom in northern North America. The redrawing of the boundaries of colonial rule in the 1830s and 1840s, then, not only illustrates that under self-government all selves were not equal, but also that these exclusions were pivotal to the consolidation of patriarchy and white supremacy in early-Canada. In short, they made the practice of settler-colonialism a reality.