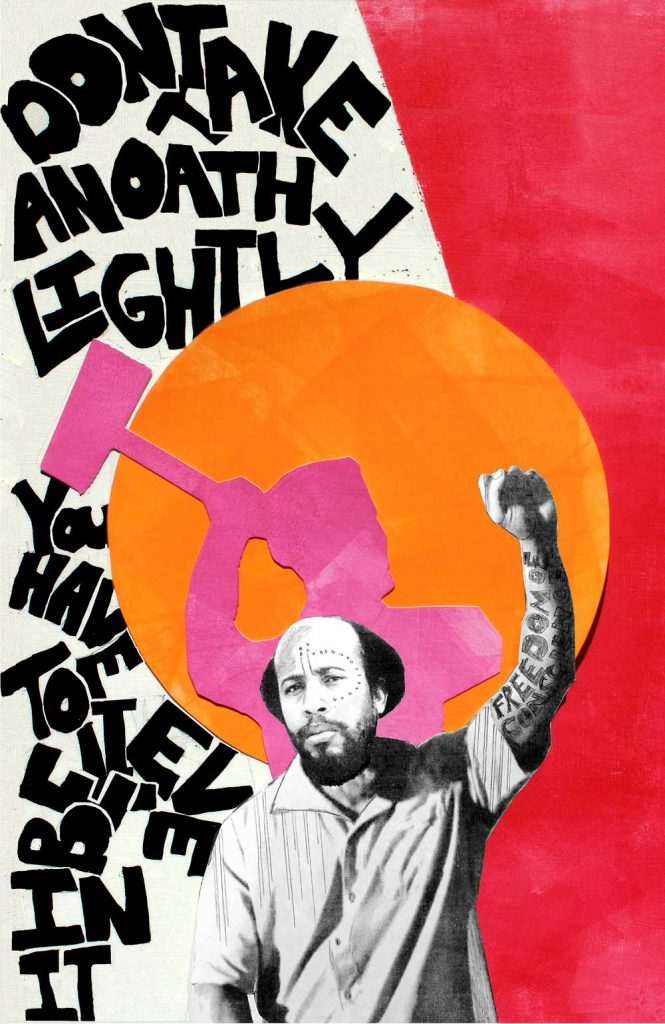 [Image Description: In the foreground is a mixed media depiction of a middle-aged Charles Roach, shown from the waist-up. He is looking out straight at the viewer with his left fist raised above his head and the words “Freedom of Conscience” written on his arm in capital letters. Dots have been added to the left side of his face in a half circle from his nose to above his eyebrows. Behind him his a pink silhouette of a person holding a hammer in front of an orange circle. On the right is a strip of red, and in the background on the left-hand side from top to bottom are the words “Don’t Take an Oath Lightly, You have to Believe in it."]

Naomi Michelle Moyer is a self-taught multidisciplinary artist and writer who often finds herself delving into African diasporic (her)histories, perceptions of Blackness, community, and how they connect to Black experiences. Naomi is known for her zine, Black Women and Self Care: Thoughts on Mental Health, Oppression & Healing, and, more recently, her print series, Black Women in Canada, that pays tribute to some of Canada’s most radical Black feminists from 1793 to 2006. Naomi’s work stems from collaborating with grassroots organizations and publishers and designing posters, t-shirts, and illustrations with themes of resistance and empowerment.

Barrington Walker is an Associate Professor in the Department of History at Queen’s University and an historian of modern Canada who focuses on the histories of Blacks, race, immigration, and the law. His work seeks to illuminate the contours of Canadian modernity by exploring Canada’s emergence as a racial state through its histories of white supremacy, slavery, colonization/immigration, segregation, and Jim Crowism.

Austin, David. Fear of a Black Nation: Race, Sex, and Security in Sixties Montreal. Toronto: Between the Lines Press, 2013.

Charles Roach: Warrior, Prince, and Servant of His People

In 1988, the iconoclastic Charles Roach launched a battle against the Canadian government to remove the oath to the Queen as a condition of Canadian citizenship. In 1992, the Court of Appeal threw his case out, but in 2012 Roach, battling a life threatening illness, launched a similar suit: “I cannot see myself taking the oath to a symbol that is racist.... It is against fundamental freedoms.” Roach’s fight for fundamental freedoms and his moral outrage at the notion of having to pledge allegiance to a British monarch—a figure who for him represented colonization and slavery—typified the life’s work of one of Canada’s most important Civil Rights activists and champions.

Roach came to Canada in 1955, at a time when Canadian immigration policy, based on a racial and ethnic ladder of preference, only begrudgingly cracked open its gates for a select few people of African descent, generally those deemed to be of “exceptional merit.” Roach’s arrival to Canada dovetailed with growing Civil Rights activism across North America and postcolonial independence movements in Africa, Latin America, and the Caribbean.

Roach left his native Trinidad during this time and headed for the University of Saskatchewan, called by his desire to study theology and become a member of the priesthood. This was not to be, however. Shortly after his arrival in Canada, his plans changed. Roach had perhaps decided that the courts, rather than the church, would serve as the most effective venue for social change. After studying human rights law at the University of Toronto, Roach embarked on a life-long mission to push our country to live up to its ideals of the “just society,” following in a long line of Black activists in Canada dating back some 200 years. Roach become a member of the bar in 1963, co-founded Caribana—an annual festival of Caribbean culture held in Toronto—in 1967, started his practice in 1968, and became a member of the North American National Council of Black Lawyers in 1969.

Roach was also one of the founding members of the Black Action Defence Committee (BADC). BADC was formed in the wake of the police killings of two Black men in Toronto in 1978–79: Buddy Evans and Albert Johnson. Alongside other giants of the Civil Rights movement in Canada—Dudley Laws, Sherona Hall, and Lennox Farrell—Roach founded the committee to publically decry police violence and brutality. Pressure from BADC eventually resulted in the formation of Toronto’s Special Investigations Unit, a civilian oversight body that continues to have an important role in placing a check on police conduct in the city.

This important and lengthy list of accomplishments scarcely does justice to the greatness of this man and his importance to Canada, the city of Toronto, and its citizenry. On 2 October 2012, many tried to express the enormity of what Charles Roach meant to them on the occasion of his death. Words like fearless, brilliant, and kind were invoked to paint a picture of this fearless man, Charles Roach, warrior, prince, and servant of his people.