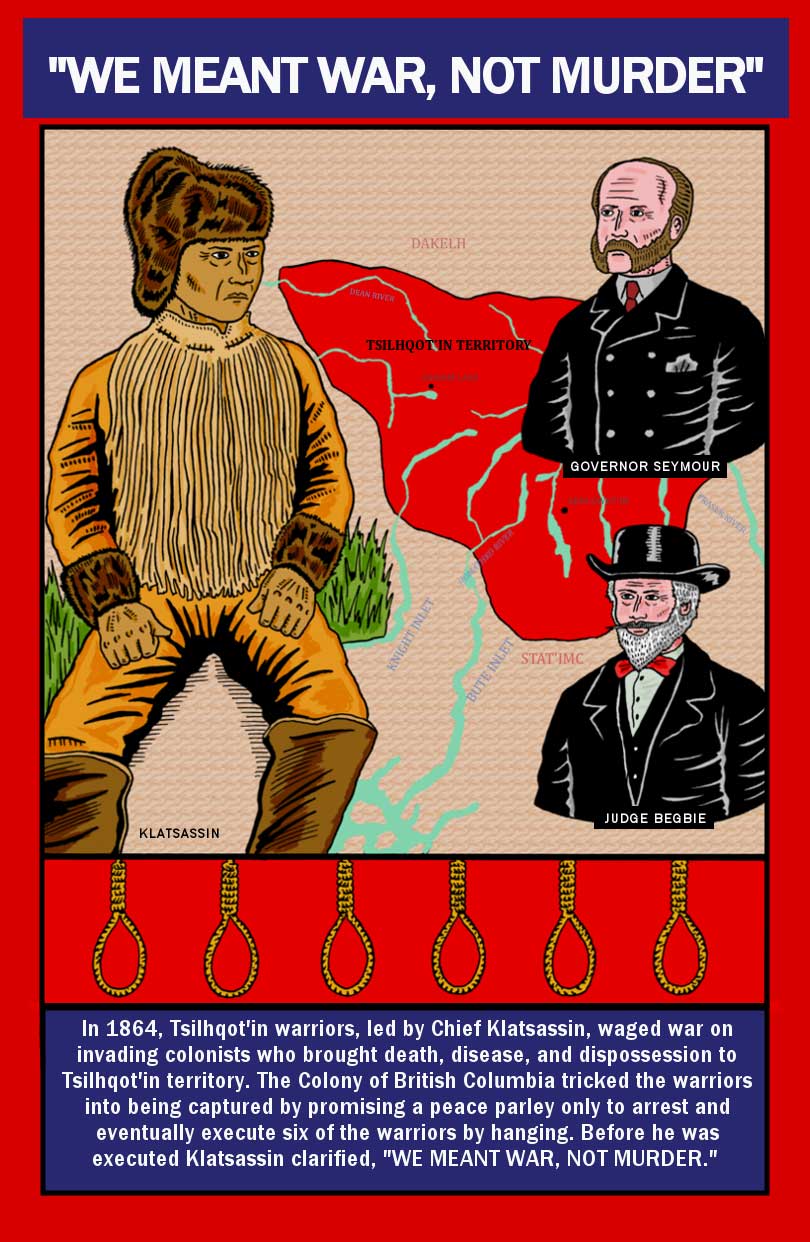 [Image Description: On the top of the poster is a quote from Chief Klatsassin, “We mean war, not murder.” Below the title is the main image with three illustrations of historical figures involved in the 1864 Tsilhqot'in War: Tsilhqot'in warrior, Klatsassin; British Columbia’s governor, Frederick Seymour; and Chief Justice of British Columbia Matthew Baillie Begbie. In the background is a map of what is today known as British Columbia, with the Tsilhqot'in territory in red to show where the conflict took place. Directly below the main image are six drawn nooses to symbolize the six warriors executed by the state. The bottom of the poster includes a textbox providing historical context that is included in the poster’s main essay.]

Poster and Introduction by Gord Hill with Sean Carleton

The Tsilhqot’in War of 1864 is one of the most important conflicts from the initial period of colonization in what is currently “British Columbia.” In many ways, it illustrates the colonizing process, complete with devastating disease, conflict over land and resources, and settler officials’ betrayal of Indigenous peoples.

The Tsilhqot’in War involved members of the Tsilhqot’in Nation resisting efforts by settlers to build a road that would cut through their traditional territory in the interior of the colony of British Columbia. The road was initiated by Alfred Waddington, a colonial official and businessman, who lobbied his government and business friends for a wagon road to be built from Bute Inlet to Fort Alexandria that would connect to the Cariboo Road and continue on to the goldfields at Barkerville. Without adequate consultation with the Tsilhqot’in, the settler government approved the road for construction.

The Tsilhqot’in, however, had been hit with a smallpox epidemic introduced by settlers in 1862, and a number of war chiefs took it upon themselves to prevent further unwanted incursions into their territory. When road construction began in the area near Bute Inlet, Tsilhqot’in warriors carried out a series of attacks in April and May 1864, killing 19 settlers.

Fearing a general uprising of Indigenous peoples across the colony, the government, led by Governor Frederick Seymour, immediately dispatched two armed expeditions to find and punish the Tsilhqot’in, but both failed. Resorting to deception, Gold Commissioner William Cox sent word to the Tsilhqot’in that he wished to meet to conduct peace talks, but when five Tsilhqot’in leaders—Klatsassin, Piell, Tellot, Tahpit, and Chessus—arrived, they were taken prisoner and sentenced to death by Judge Matthew Baillie Begbie, popularly known in British Columbia history as the “Hanging Judge.” The warriors were executed on 26 October 1864. A sixth Tsilhqot’in leader—Ahan—was hanged in July 1865. During the show trial, Klatsassin declared that the Tsilhqot’in had waged war, “not murder.” Nevertheless, the Tsilhqot’in warriors were executed and written into British Columbia’s (colonial) history as merciless murderers.

150 years later, in October 2014, the government of British Columbia apologized for hanging the Tsilhqot’in chiefs. Premier Christy Clark stated, “We confirm without reservation that these six Tsilhqot’in chiefs are fully exonerated for any crime or wrongdoing.” In March 2018, the federal government of Canada similarly absolved the chiefs at a public event. Prime Minister Justin Trudeau proclaimed, “We honour and recognize six Tsilhqot’in chiefs—men who were treated and tried as criminals in an era where both the colonial government and the legal process did not respect the inherent rights of the Tsilhqot'in people.”

While many saw the acts of the provincial and federal governments as meaningful steps towards “reconciliation,” it is clear that the state has ulterior motives. The governments issued their apologies as part of a strategy to try to win over Indigenous peoples in British Columbia and pacify their ongoing resistance to large-scale capitalist resource extraction. To protect the land and water for future generations, Indigenous Nations and allies are organizing unprecedented mobilizations against proposed pipeline projects through unceded Indigenous territories, most notably the Kinder Morgan Trans Mountain pipeline project, as well as coal, copper, and gold mines. In context, the 2014 and 2018 apologies, then, clarify what Klatsassin and others knew 150 years ago: the Tsilhqot’in were engaged in a struggle to defend their sovereignty and territory from external threats, a struggle that is still very much alive today.