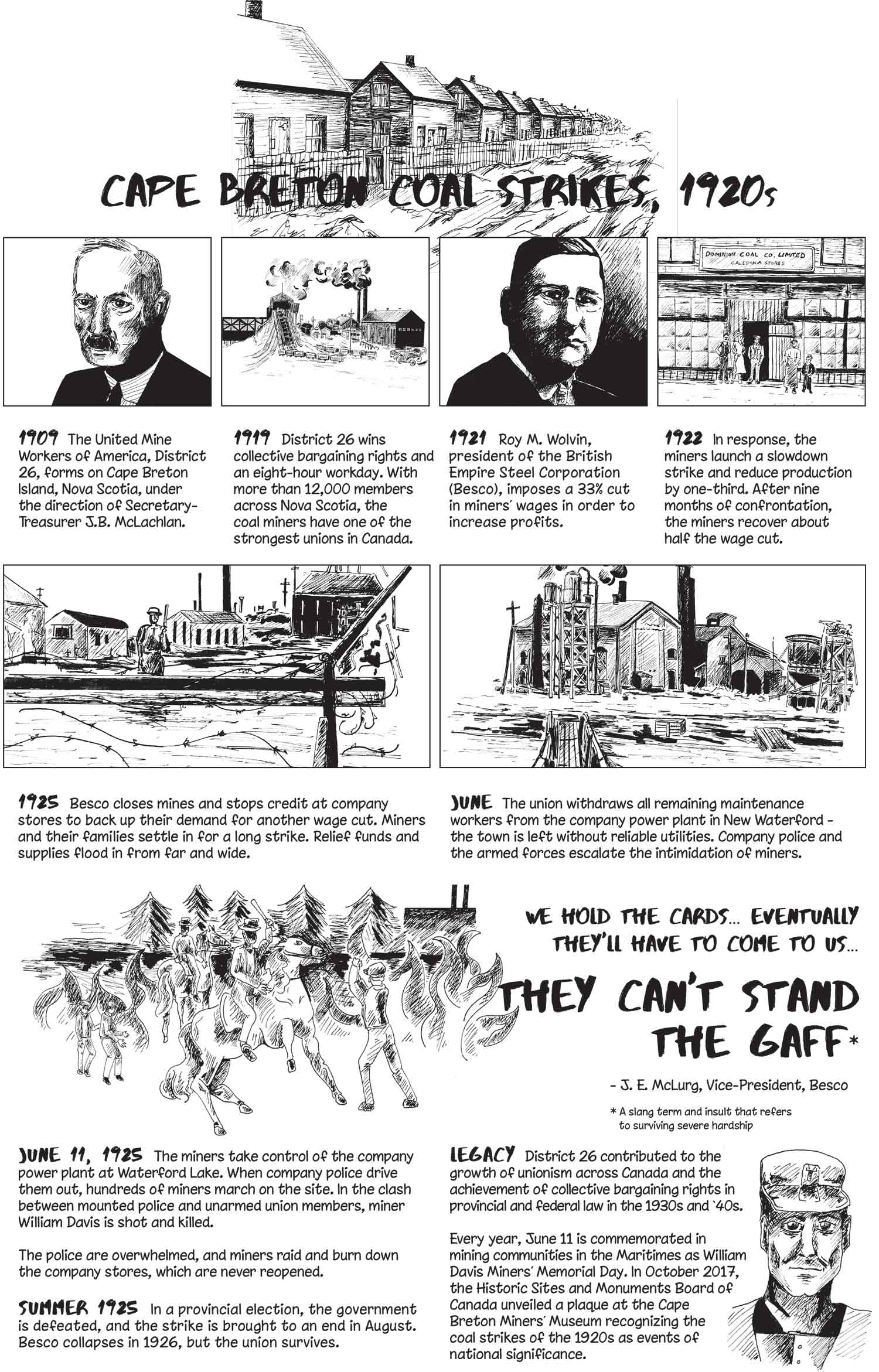 [Image Description: This poster consists of a series of comics panels  depicting coal miners’ struggles in the early 20th century. At the top of the poster, prominent workers such as J.B. McLachlan and William Davis are displayed as well as the Besco president Roy M. Wolvin. Towards the bottom of the poster there are images showing the growing conflict between the miners and the company, leading to William Davis being shot and killed by police.]

Karen Jeane Mills is an illustrator and designer. A graduate of NSCAD University in Halifax, NS and NSCC in Middleton, NS, she grew up in Canada’s Maritime provinces and now hangs her hat in Calgary, Alberta. She is a community volunteer inspired by working people in the past and present. More of her work can be seen on Instagram (http://www.instagram.com/karenjeane).

David Frank has taught at the College of Cape Breton and the Atlantic Region Labour Education Centre and was recently named a professor emeritus in Canadian history at the University of New Brunswick. He has published extensively on Cape Breton labour and working-class history, including a prize-winning biography of union leader J.B. McLachlan.

The Dictionary of Canadian Biography (http://www.biographi.ca/en/) includes a biography of the labour martyr William Davis.

“They can’t stand the gaff!” The words failed to intimidate the coal miners. Instead, the insult contributed to their resistance, and “standing the gaff” became a rallying cry during the long 1925 strike. That strike was the culmination of the labour war in the Nova Scotia coal mines in the 1920s, an episode of class conflict in Canadian history as dramatic and consequential as the 1919 Winnipeg General Strike. To put the events in context, there are five themes to consider.

1. The political economy of coal
In 1920 Montreal financiers engineered a merger of all coal and steel producers in the province, issuing stocks and bonds that promised big returns in the boom years ahead. Coal was still the main source of industrial energy in Canada, as it would be into the 1950s, but markets fell apart at the end of the First World War when industries in Central Canada turned to suppliers in the United States. For the British Empire Steel Corporation, wage cuts were the preferred solution to their ongoing crisis of corporate survival. But to succeed, they would have to break the union.

2. The miners’ union
After long years of struggle and tragic disasters in 1917 and 1918, the miners were finally gaining ground at the end of the war. In 1919 they won the eight-hour day and recognition of the United Mine Workers of America. They expected improvements in living conditions and safety standards to follow. With labour members on town councils and in the legislature, their political influence was also rising. Under the influence of socialist leaders such as J.B. McLachlan, the union called for public ownership of the coal industry.

3. Workplace resistance
When the wage cuts came, the coal miners went on strike, repeatedly showing the effectiveness of workers’ control in the industrial workplace. In the 1922 “strike on the job,” they cut production by one-third to match the wage cut. Later, in “100 per cent” strikes, maintenance workers joined the walkouts, putting company property at risk. In 1925, miners took control of the power plant at Waterford Lake, where a confrontation with provincial police on 11 June led to the shooting of William Davis.

4. Community solidarity
The people of the coal towns shared a common way of life, with strong cultural traditions that reinforced local solidarities. The outside corporation, headed by “Roy the Wolf,” was seen as a reckless invader, and governments were seen as callous bystanders. The coal miners survived these years of deprivation by falling back on the resources of family and community. By 1925, their story was widely known in Canada, and support and supplies poured in from near and far.

5. State policy
Uneven development between regions was a standing assumption of state policy in Canada, and governments had long collaborated with corporations in draining resources and subordinating the local economy to demands for a cheap fuel supply for Central Canada. Three times during the strikes of the 1920s, the Canadian armed forces occupied the coalfields. In 1923, the province sent in provincial police when steelworkers went on strike for union recognition; and when the coal miners came out in a sympathetic strike, union leader McLachlan was jailed for sedition. Finally, with the appointment of a royal commission in late 1925, coercion started to give way to pacification, and Besco was forced to accept the union.

“The bosses couldn’t stand the gaff,” wrote the labour poet Dawn Fraser in 1926, “Oh, let me write their epitaph.” The collapse of Besco was a vindication for the miners. Their union survived, one of the few coal unions in North America to withstand the employer offensive of the 1920s. The coal miners also held on to their hopes for a better way of life, and their struggles helped inspire the next wave of union organizing and the enactment of collective bargaining rights in the 1930s and 1940s. To this day, descendants of the people of the coal country are found in union struggles across Canada.